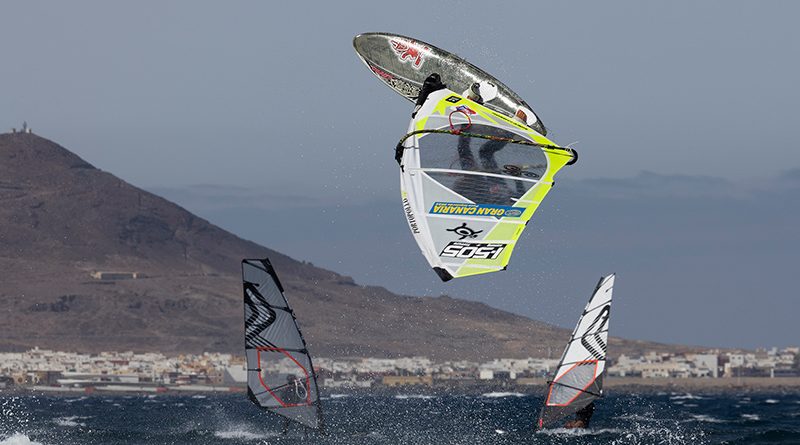 A slightly better forecast for Day 6 of the 2022 Gran Canaria PWA Windsurfing World Cup produced more action as the Men’s Single Elimination resumed after a lay day on Wednesday. Now, only the top 12 men remain in the draw after an extremely close day of competition where there was almost nothing to separate several sailors. Today may not have been classic Pozo conditions, but the world’s best sailors still produced an outstanding display to keep everyone more than entertained. 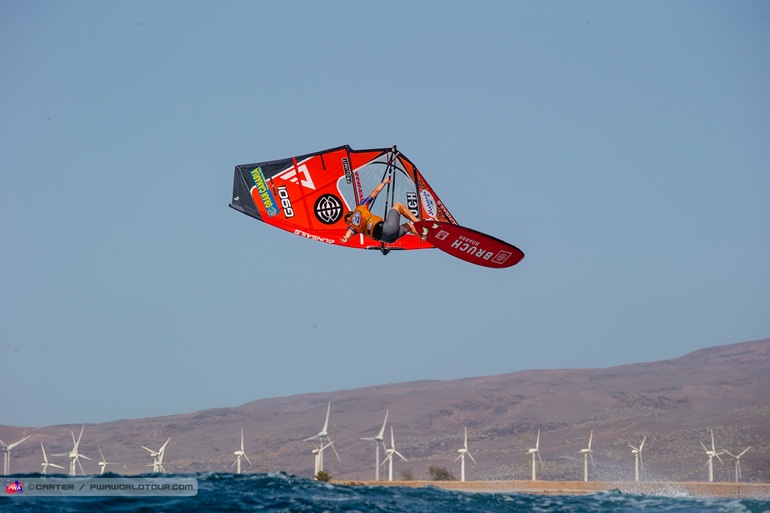 Wave Men’s
Top seed, Ricardo Campello (Naish / Naish Sails), avoided any upsets in his first heat of the contest as he confidently dispatched of Mike Friedl (Goya Windsurfing) in Heat 16a. The reigning event champion landed a perfect double forward and a tweaked pushloop on his way to posting the highest scoring heat of the day – 21.24 points. The 37-year-old will now face Miguel Chapuis (JP / NeilPryde) in the round of 16 after the young Spaniard overcame local boy – Omar Sanchez (Tabou / GA Sails). 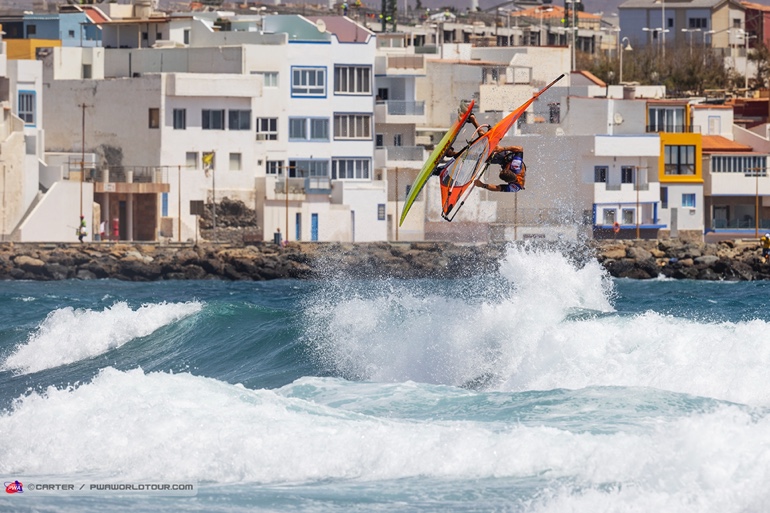 Close Calls
Throughout the day there were several close calls with 4 heats being decided with less than a point separating the winner and loser. The closest of those heats involved Liam Dunkerbeck (Starboard / Severne Sails / Black Project Fins) and Antoine Martin (Starboard / North Sails) in Heat 14b – where by the end of the heat just 0.31 of a point separated them. This time the verdict went in Dunkerbeck’s favour as the 18-year-old claimed the biggest scalp of his young career thus far with his jumping inflicting the damage – meaning the young Spaniard advances into the third round for the first time in just his third event. Dunkerbeck will now meet Morgan Noireaux (JP / NeilPryde / Black Project Fins) in Heat 19b for a place in the quarterfinals. Noireaux also advanced from Heat 14 by less than a point after battling past Aleix Sanllehy (Goya Windsurfing). 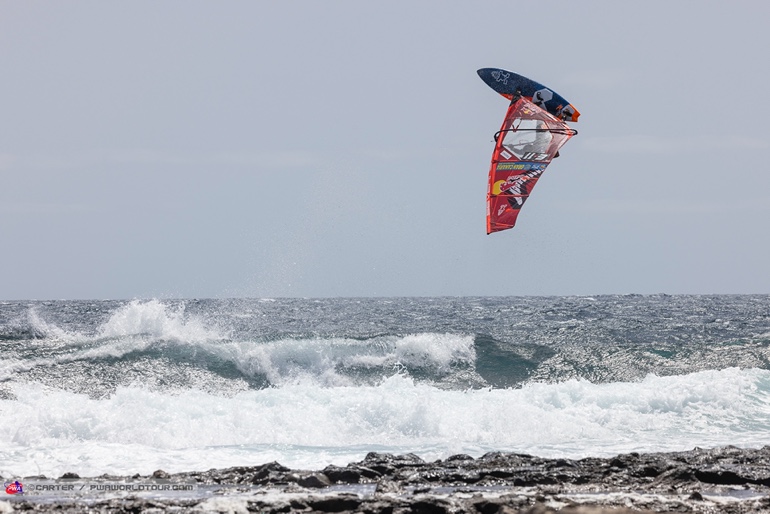 The other heats to see incredibly close duels were Heat 12a and Heat 17b. In Heat 12a Dieter Van der Eyken (Severne / Severne Sails) edged out another local – Alessio Stillrich – with the Belgian making the better of the waves on offer. In Heat 17b, Marino Gil (Goya Windsurfing) made a flying start against – Marcilio Browne (Goya Windsurfing) – as he quickly opened with a one-footed backloop and a 7.38 point wave to put Browne under immediate pressure. Credit goes to Browne though, who didn’t get flustered and just stuck to his game plan. As the heat progressed the 2013 wave world champion slowly started to turn the screw by landing a one-hand, one-foot backloop and an excellent double forward, whilst he dropped his best wave score with his final effort to edge into the lead. Gil was slightly unfortunate as he spent the last few minutes of the heat desperately racing up and down looking for a ramp to improve his jumping score, but sadly the opportunity didn’t present itself and he eventually lost out by just 0.39 of a point. 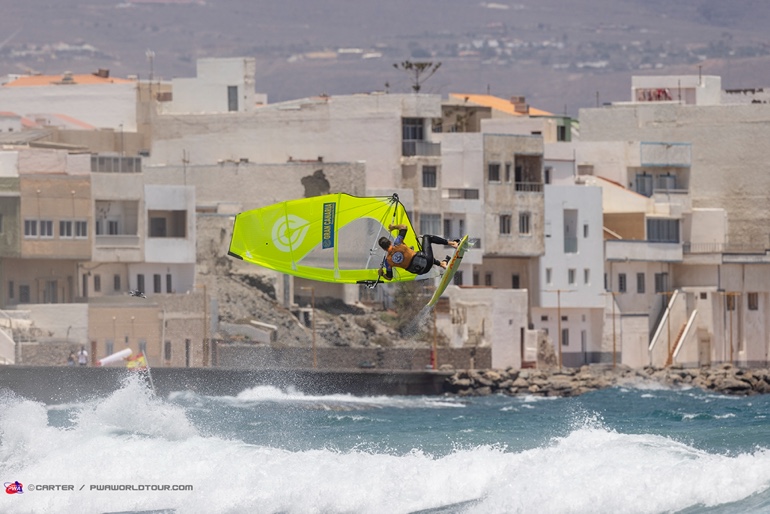 On the other side of Heat 17 – Thomas Traversa (Tabou / GA Sails) – claimed an excellent victory over Josep Pons (CS Custom Boards / Point-7 / Black Project Fins) to book his place in the quarterfinals by landing a one-footed backloop and a well executed tabletop forward. Pons, like Gil, found it difficult to hunt out a suitable ramp in the dying stages of the heat and was left to count a 2.75 point forward loop. 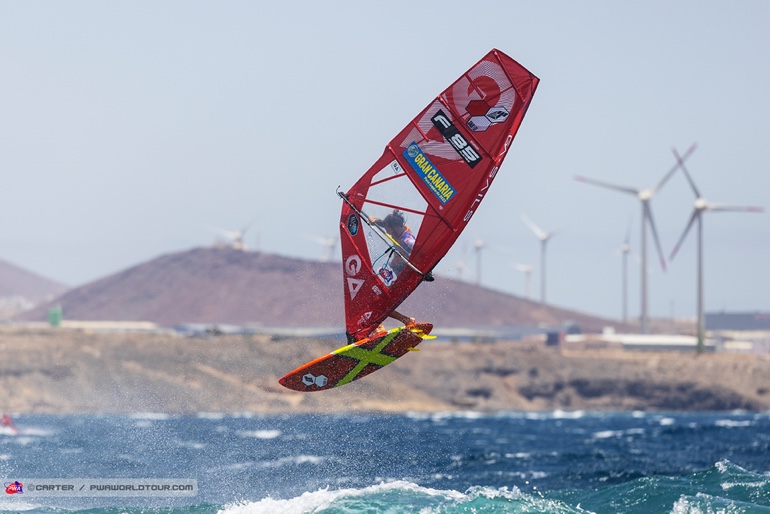 In what proved to be the final Men’s heat of the day – Marc Paré (Fanatic / Duotone) and Philip Köster (Severne / Severne Sails / Black Project Fins) – both produced great performances in diminishing conditions to end the hopes of – Julian Salmonn (Bruch Boards / GUNSAILS) and Dieter Van der Eyken. Paré and Köster have both looked like two of the best sailors on the water so far and they will now have a blockbuster showdown in the quarterfinals. 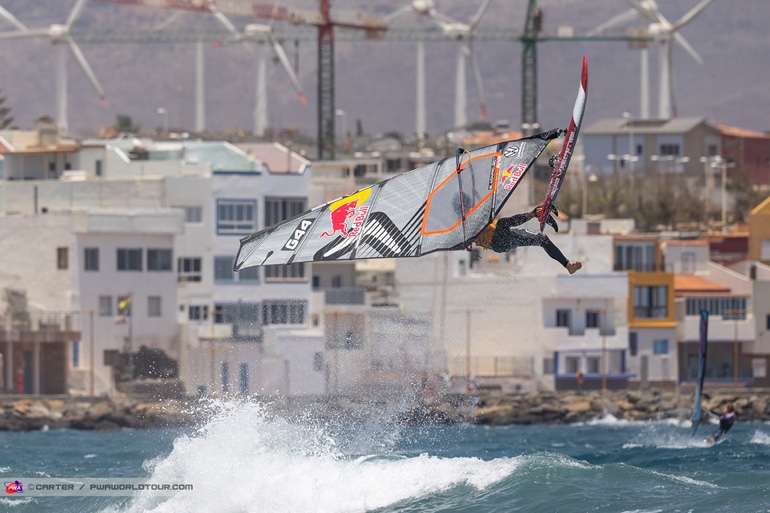 Only two heats of the round of 16 could be completed before the waves slackened off over high tide, so the remainder of the third round will be the priority tomorrow. Takuma Sugi (Tabou / GA Sails / Black Project Fins) will face Victor Fernandez (Fanatic / Duotone), whilst Morgan Noireaux will go up against Liam Dunkerbeck. In the final heat to decide the top 8 sailors – Robby Swift (JP / NeilPryde / SWOX) will sail against fellow teammate – Leon Jamaer (JP / NeilPryde) – who left it late to fight back against Arthur Arutkin (Fanatic / Duotone / Black Project Fins), whilst ss previously mentioned, Campello takes on Chapuis. 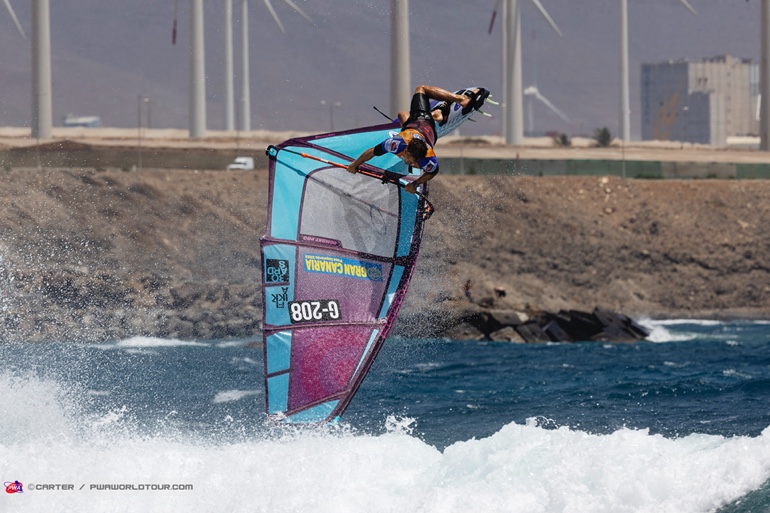 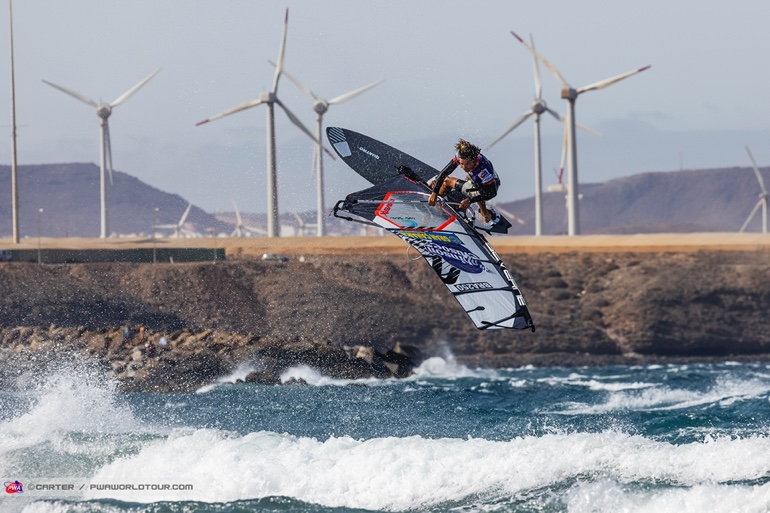 The forecast for Friday looks positive with a similar forecast for today meaning that we should hopefully see more action on the water as the Men’s Single Elimination heads towards its climax. With low tide not being until 9:06 am (GMT+1), the sailors will meet slightly later tomorrow morning at 10am – giving a first possible start at 10:30am.

You can stay up to date with all the latest developments from Gran Canaria— including the live stream, elimination ladders, entry list, images and live ticker simply by clicking HERE and scrolling to the bottom of the page.