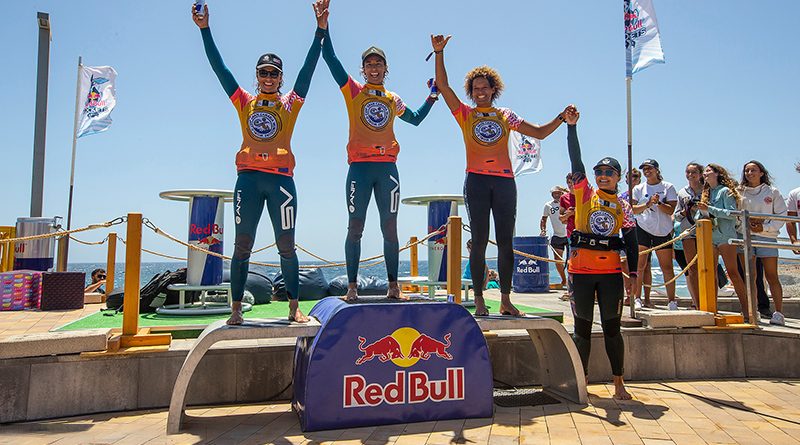 Day 4 of the 2022 Gran Canaria PWA Windsurfing World Cup saw the completion of the Women’s Single Elimination in small waves and winds ranging between 20-30+ knots. The Moreno Twins proved to be their usual reckoning force as Daida (Severne / Severne Sails / Maui Ultra Fins) and Iballa (Severne / Severne Sails / Maui Ultra Fins) booked their places in the final, but there was a slight shock in the Winners’ Final as Iballa defeated Daida in Pozo for only the second time in her career.

Wave Women’s
The Moreno Twins successfully navigated their way through the semifinals to set up an all too familiar all Moreno final – as has been the case so many times over the years. Upon hearing the results of the semifinals, Daida (Severne / Severne Sails / Maui Ultra Fins) and Iballa, were both delighted to hear the news before preparing for the Winners’ Final. 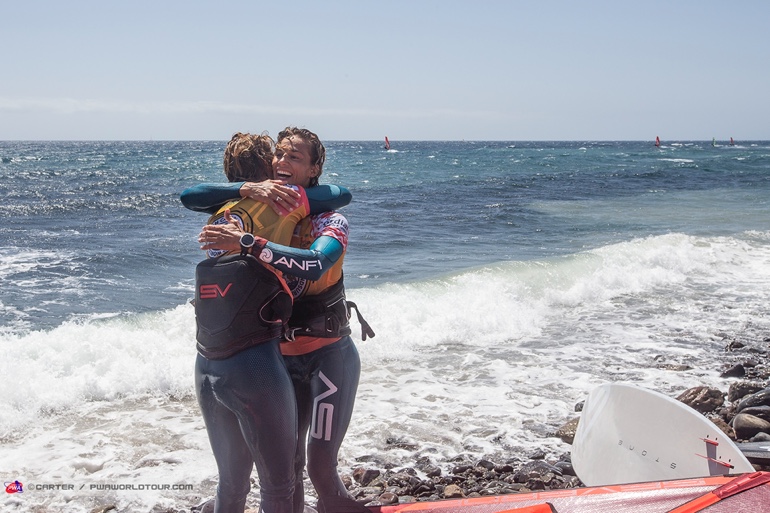 10 years on from first defeating Daida in Pozo, Iballa managed to achieve this feat again as she produced a superb display of sailing to earn a deserved victory in the Single Elimination. Fittingly, Iballa posted the highest scoring heat of the contest in the Final to earn the top place on the podium here for the first time since 2012 – although she will still need to try and defend that position in the Double Elimination to walk away from the event as the champion. For a time, it looked as though Iballa may miss out on a place in the final as Justyna Sniady (North Sails / Maui Ultra Fins) led their semifinal heading in the latter stages of the heat. However, Iballa pulled it out of the bag in the last minute by linking together a 5.5 point wave to turn the heat on its head. In the final, Iballa made a solid start by landing a textbook backloop before later adding a radical one-foot forward to her scoresheet, whilst her best wave work was completed with her last two waves to put the final out of reach of Daida. 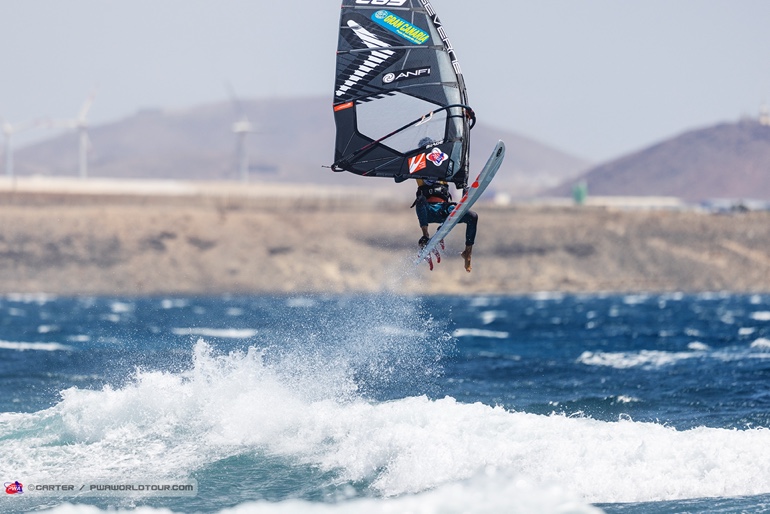 Iballa Moreno after winning the Single Elimination of the 2022 Gran Canaria PWA Windsurfing World Cup: “I can’t believe it. It’s been a while to be in this position here. The last time I competed here (2019) I finished 4th, so I was just happy to be back in the final with my sister [Daida] as that has also been a long time. The conditions were tricky, but I managed to sail pretty consistently and got lucky to find a couple of good different jumps and wave rides. I know I was lucky to win. I know Daida is the queen of Pozo, so it’s really hard to beat her. I think it’s only the second time I have beaten Daida in all those years, so that shows how hard it is to beat her and that she’s the best here.” 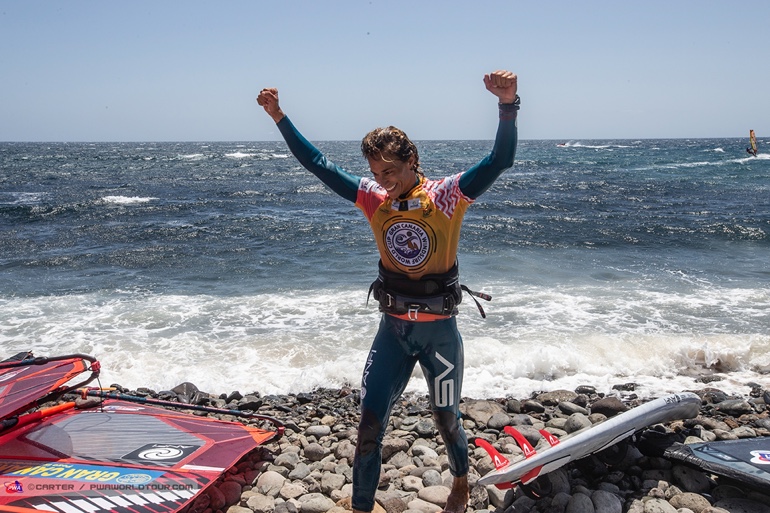 Daida produced a big performance against – Sarah-Quita Offringa (Starboard / NeilPryde / Maui Ultra Fins) – in the semifinals as she posted a score of 19.26 points to progress, but never quite hit those heights in the final. Daida attempted an air taka and frontside aerial during the final but wasn’t quite able to make them stick, which meant she was unable to deny Iballa on this occasion. However, you certainly wouldn’t bet against a comeback by Daida in the Double Elimination 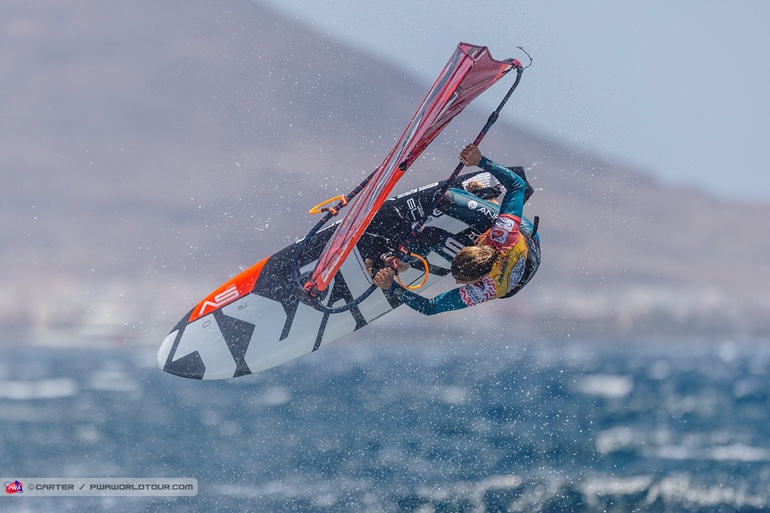 Sarah-Quita Offringa secured the final place on the podium after taking down Justyna Sniady in the battle for third and fourth. The Aruban stomped a 7 point tweaked pushloop to make a strong start to the heat and never looked back as the reigning world champion went on to claim a convincing victory. Offringa will now look to see if she can climb the ladder in the Double Elimination, as will Sniady, who finished second here in 2019. 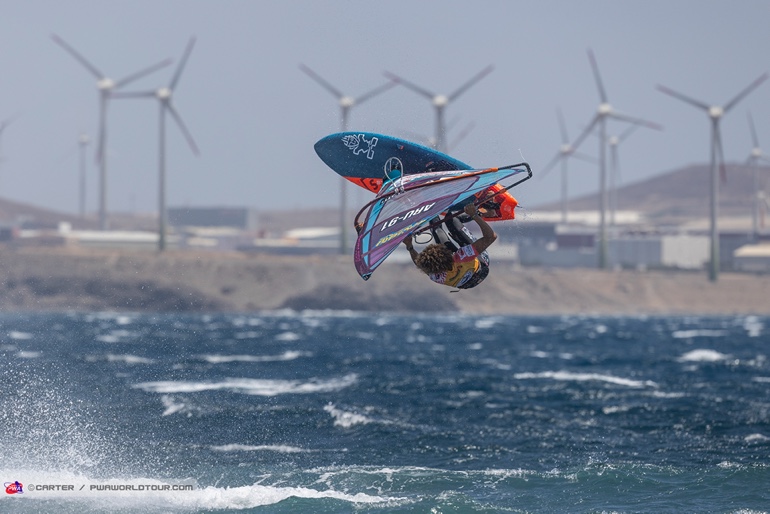 Red Bull Rockets
During this year’s contest, the top 8 women and top 16 men are also competing in a separate jumping contest known as the Red Bull Rockets, which is a special prize that will be awarded to the highest jump of the event, and that will undoubtedly be an important incentive for the riders. “The Red Bull Rockets will award the highest jump, so we’re sure to see a great show,” Dunkerbeck.
So far, Daida Moreno is winning this contest after landing a 4.4m stalled forward in the semifinal today, whilst Sarah-Quita Offringa is the next closest challenger after reaching a height of 3.9m during a forward loop. 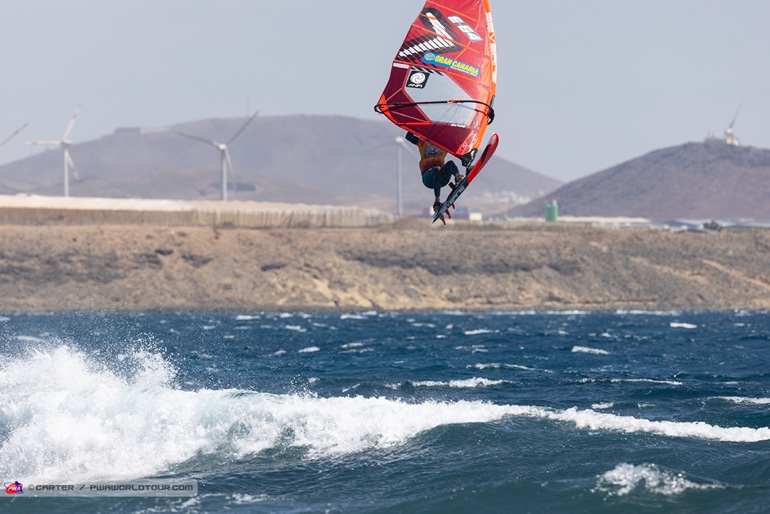 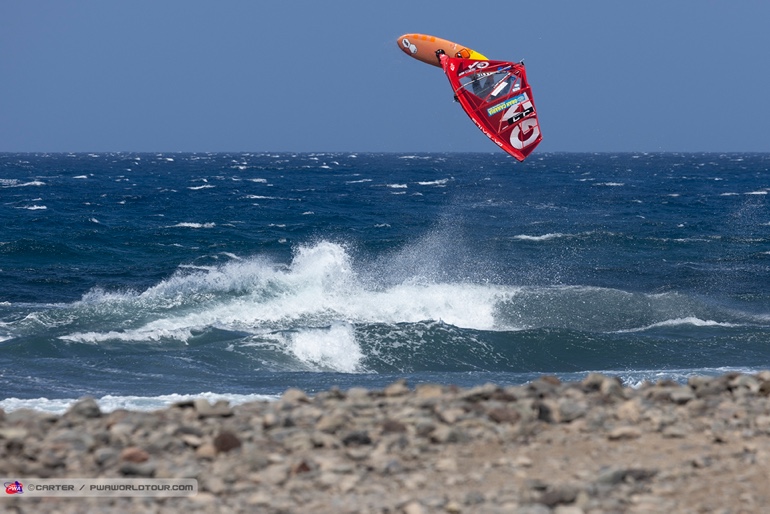 The opening two heats of the second round were also completed before the close of play, which saw Josep Pons (CS Custom Boards / Point-7 / Black Project) defeat Jules Denel (JP / NeilPryde) in Heat 9a, whilst Thomas Traversa (Tabou / GA Sails) came out on top in the battle of France against Baptiste Cloarec (RRD / RRD Sails). 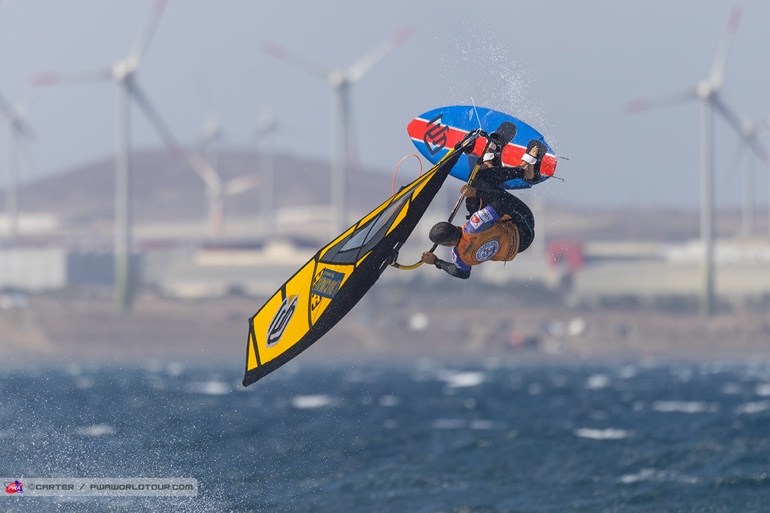 In the final heat of the day – Heat 10 – Marcilio Browne (Goya Windsurfing) set the highest scoring heat of day four as he posted a score of 20.37 points to knock out Jose Romero (Challenger Sails). Meanwhile, Marino Girl (Goya Windsurfing) emerged from a closely fought heat against Moritz Mauch and will now face Browne in the next round 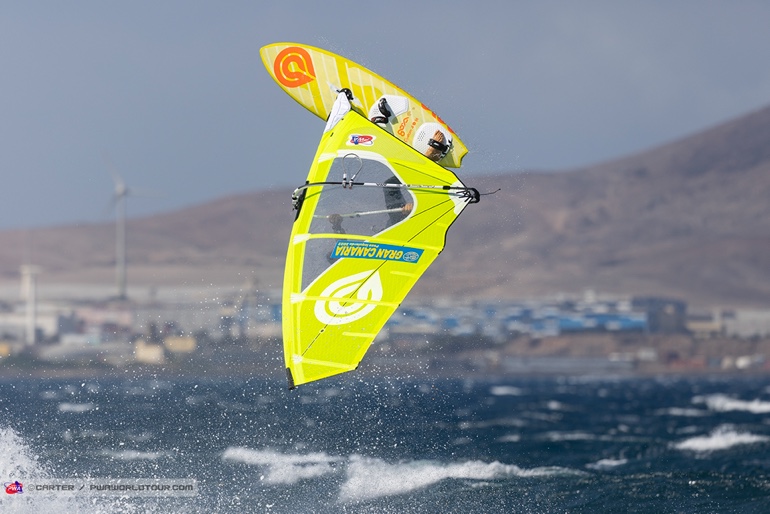 The forecast for tomorrow looks slightly lighter than today, but with the gradient wind expected to be more northeast than the previous days hopefully the thermal will kick in and there will be a few waves with the tide on the push in the morning. The skippers’ meeting has been called for 9:30am with the action commencing from 10am (GMT+1) onwards.

You can stay up to date with all the latest developments from Gran Canaria— including the live stream, elimination ladders, entry list, images and live ticker simply by clicking HERE and scrolling to the bottom of the page.
Also if you don’t already, follow us on our Social Media Channels: