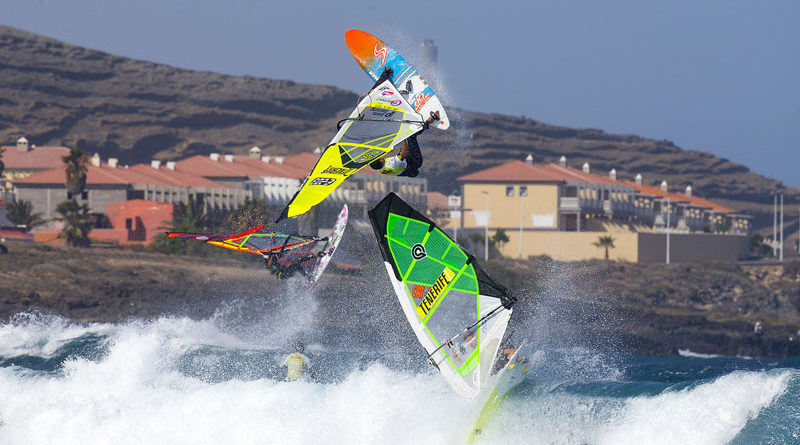 Tenerife begins with a bang
No time was wasted in beginning this year’s contest in Tenerife with good conditions on offer from the word go. So after a quick registration the action began promptly at 1pm in chest-head high wave and enough wind for most of the sailors to be on 4.2m-4.7m sails. By the end of the first day the opening round of the men’s single elimination has been completed, while only the top 8 women are left standing. Up to this point the top seeds have survived unscathed, but there were a few close calls on an exciting first day of competition, which saw an exceptionally high level of sailing. 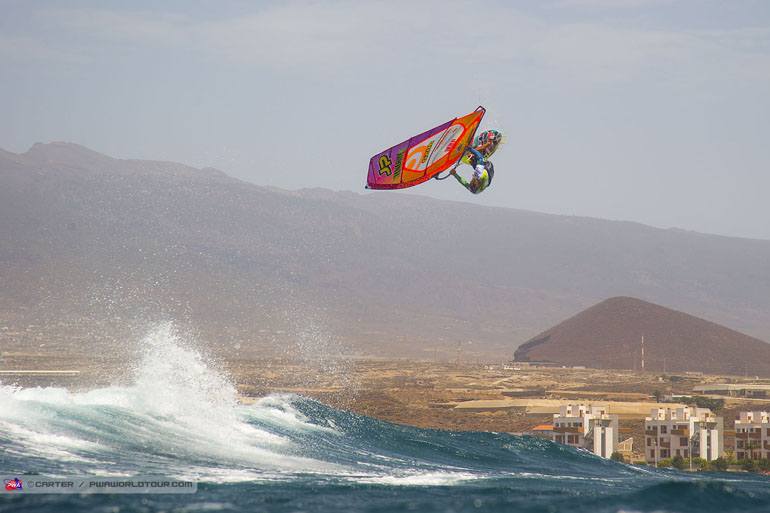 Action on the opening day

Women’s
Sarah Hilder (Simmer / Simmer) and María Andrés (Fanatic / NorthSails) successfully navigated their way through the opening heat of the single elimination with Hilder defeating 14 year old Alex Escherich (JP / NeilPryde), who was making her debut on the PWA Wave World Tour, while Andrés’ wave riding proved to be the difference between her and Birgit Rieger. 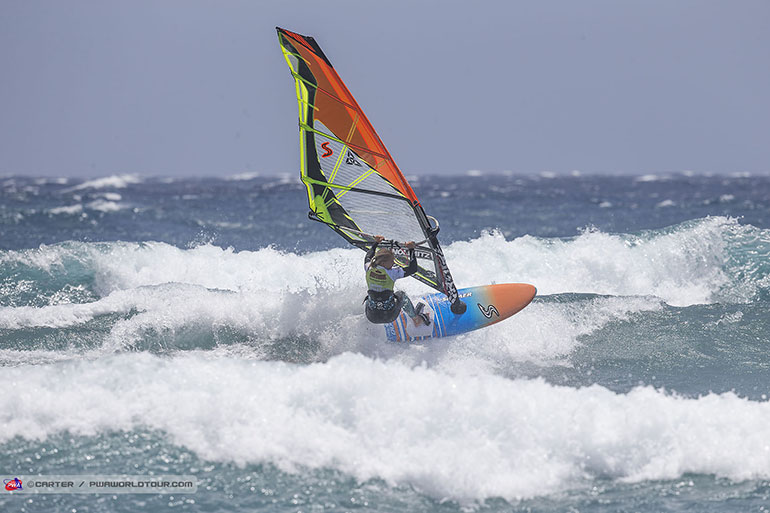 The opening heat of the second round saw Sarah-Quita Offringa (Starboard / NeilPryde / Maui Ultra Fins) in action for the first time and she continued in the same rich vein of form which she showed in Pozo, Gran Canaria. The heat was close for a long time, but Offringa asserted her dominance in the latter stages against Arrianne Aukes (Fanatic / NorthSails) by landing a pushloop and an 8.5 point wave to ensure victory. Meanwhile, The b-side of the heat saw the emerging talent of Lina Erpenstein (Patrik / Severne / Maui Ultra Fins) claim the scalp of Alice Arutkin (Fanatic / NorthSails). 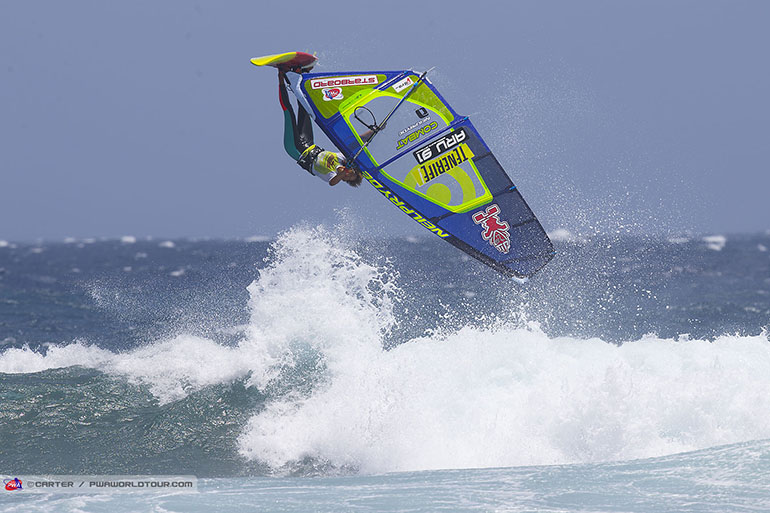 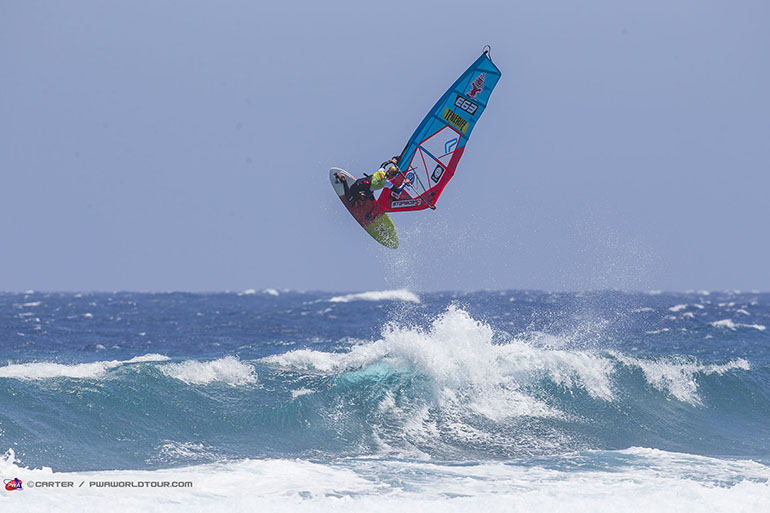 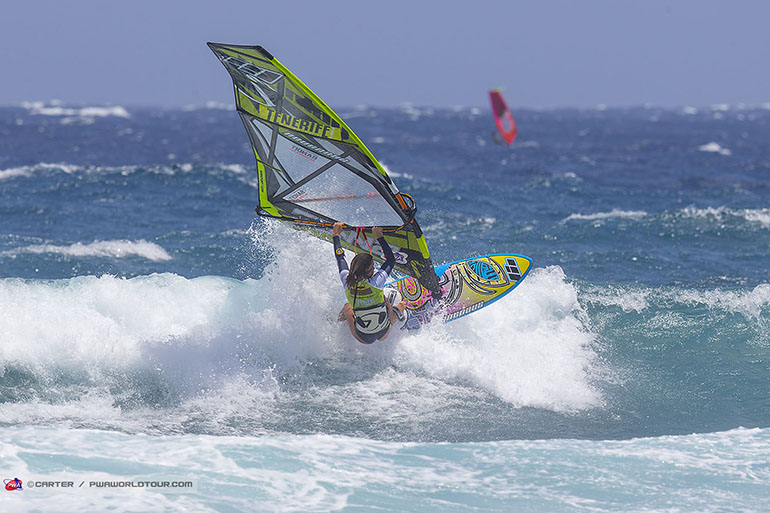 Daida Moreno (Starboard / Severne / Maui Ultra Fins) produced the standout performance of the day to rack up the highest score of the event so far — 26.13 points — as she continued her impressive start to the season. Daida landed a one-handed backloop all the way to earn 9 points — before destroying the waves with powerful frontside hacks, takas and airs. While Caterina Stenta (RRD / RRD / Maui Ultra Fins) claimed a narrow victory over fellow Italian Greta Benvenuti (Patrik / Point-7 / AL360). 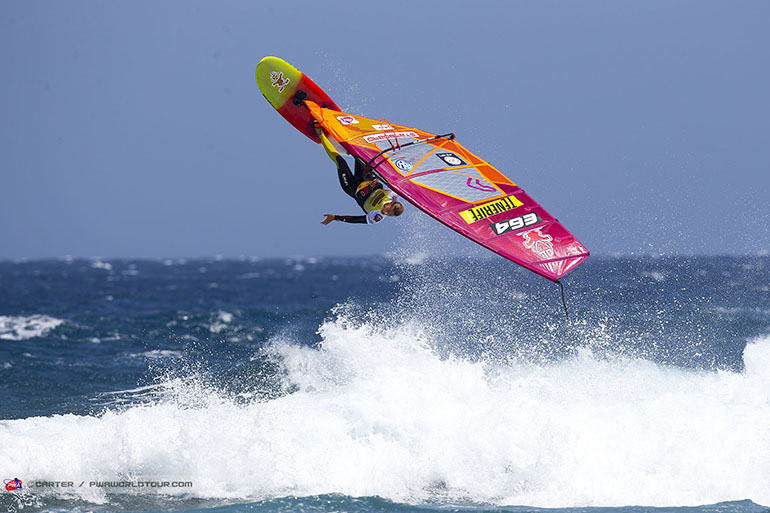 Men’s
After a disappointing 17th place in Pozo — Klaas Voget (Fanatic / NorthSails / MFC) — came out firing on all cylinders in the opening men’s heat. The German took a super aggressive approach to his wave riding which paid dividends as he defeated John Skye (RRD / RRD / MFC) — and he looks a real threat going into the next round. Meanwhile, Thomas Traversa (Tabou / GA Sails) was pushed all the way by Marc Paré (99NoveNove / Simmer / Maui Ultra Fins) and TT needed a brilliant last minute wave to avoid an upset. 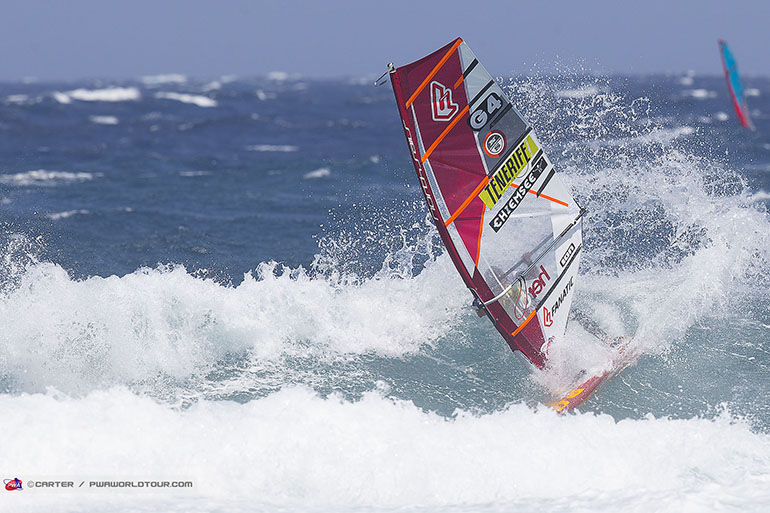 In Heat 2 Adam Lewis (Fanatic / NorthSails / SWOX) won the battle against teammate Alessio Stillrich (Fanatic / NorthSails) with a fine performance including a sick frontside 360, while generally being on top in the wave riding department. It could have possibly been a different story if Stillrich had managed to hang onto a bolt upright double forward in the opening minute, but he will now have to wait until the double. The other side of the heat saw Jaeger Stone (Starboard / Severne / SWOX / Shamal Sunglasses) in impressive form once more with his frontside riding especially catching the eye and the 25 year old is safely into the second round. 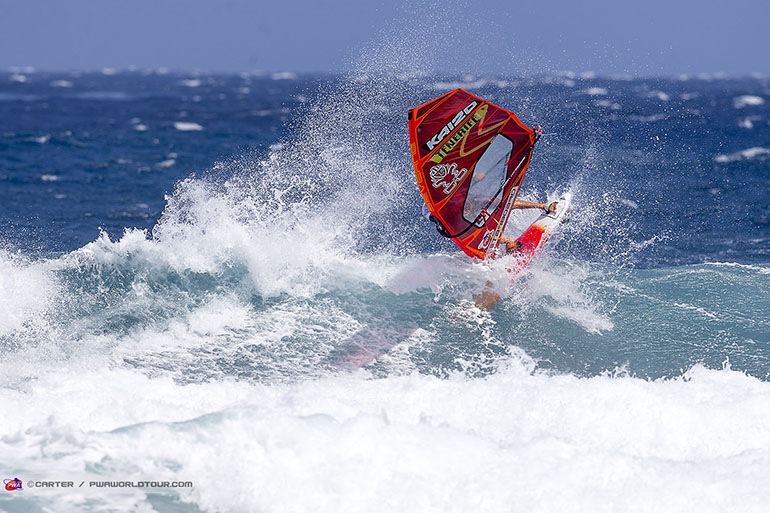 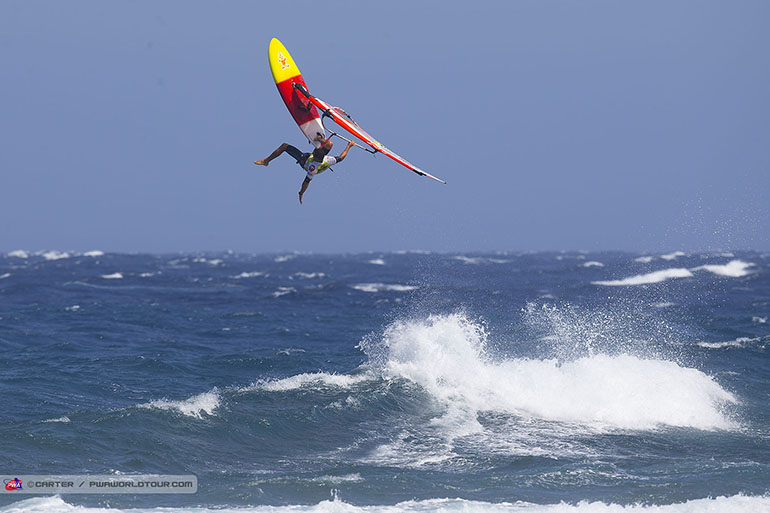 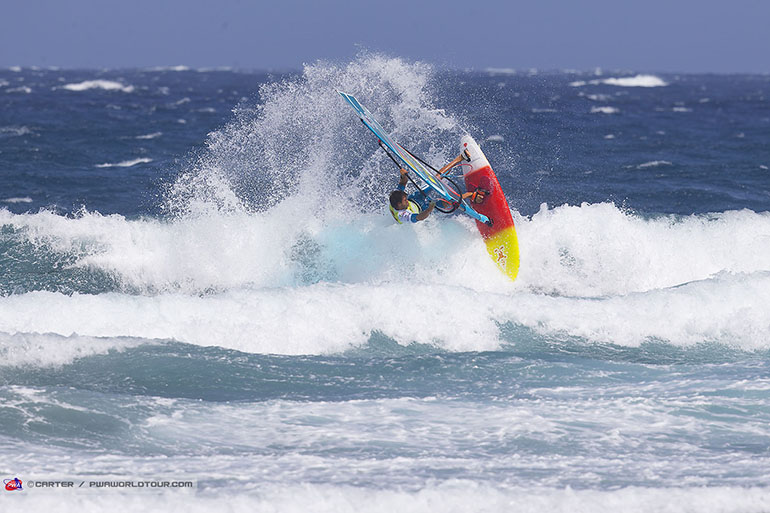 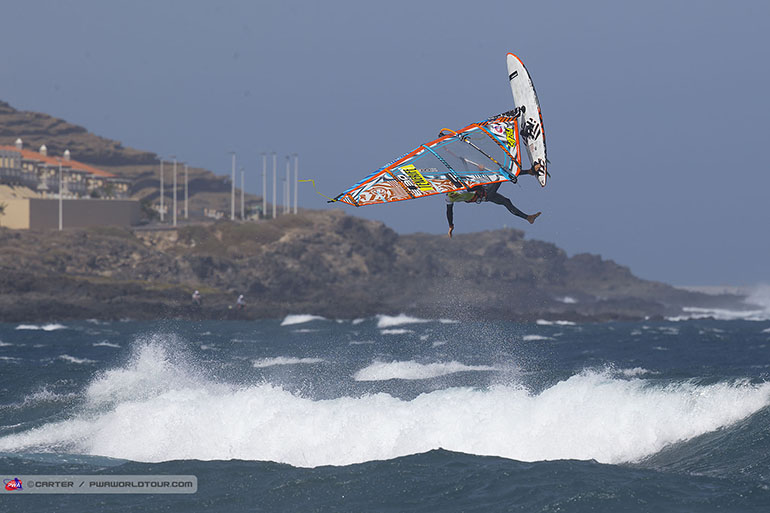 Ricardo Campello (Patrik / Point-7 / MFC) wasted little time in announcing his return on the world tour, after missing out on the opening event of the year due to injury, as he immediately stomped a 9 point double forward, but it took him until the end of the heat to assert himself against Julian Salmonn (Severne / Severne) after struggling to connect the wave scores he needed early on. Meanwhile, Moritz Mauch (Severne / Severne / MFC) took down Florian Jung (RRD / Gun Sails / Maui Ultra Fins) on the b-side of Heat 6. 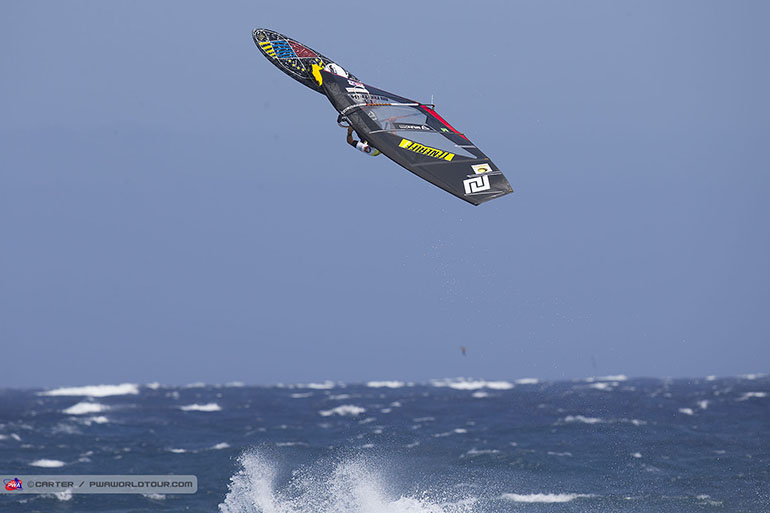 In the penultimate heat of the day — Heat 7 — Omar Sanchez (Angulo / KA Sail) edged a narrow duel against Camille Juban (Quatro / Simmer / MFC) to progress, while Robby Swift (JP / NeilPryde / Mystic / SWOX) won the battle of Britain against Ben Proffitt (Simmer / Simmer) with Swift’s double forward proving to be the difference between the two sailors on the day. 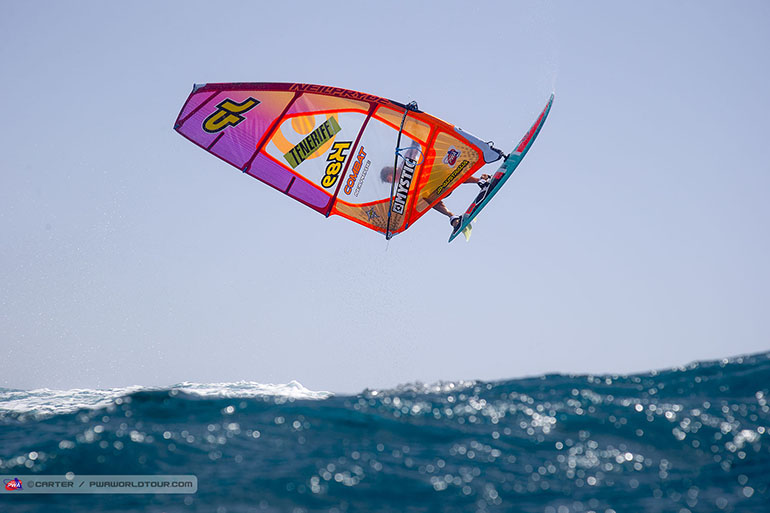 In Heat 8 Victor Fernandez (Fanatic / NorthSails / MFC) looked mightily impressive against Eric Sanllehy (Goya Windsurfing) as the current world tour leader landed the highest scoring jump of the day — 9.62 points for an immaculate double forward, while also effortlessly linking together several excellent waves with dynamic turns and frontside airs — proving that he’ll be a difficult man to beat. Josep Pons (Simmer / Simmer) gained the upper hand in the aerial battle against Aleix Sanllehy (Tabou / GA Sails) as he earned 8.5 points for a double forward, but it wasn’t enough as Sanllehy claimed a hard fought win by making the better of the waves. 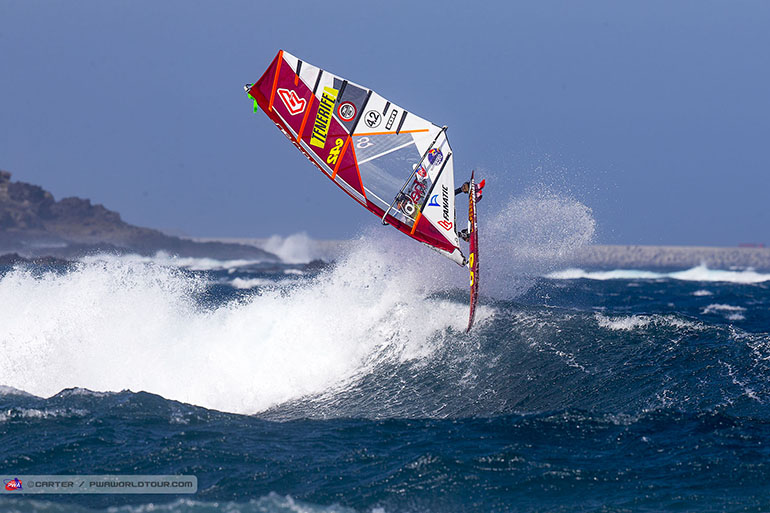 The forecast looks promising again for tomorrow with further wind and waves on offer and both fleets will meet at 11am on Tuesday morning for the skippers’ meeting. The first possible start for tomorrow is 11:30am (GMT+1). Make sure you tune into www.pwaworldtour.com to follow all of the brilliant action as it happens via the PWA live stream.