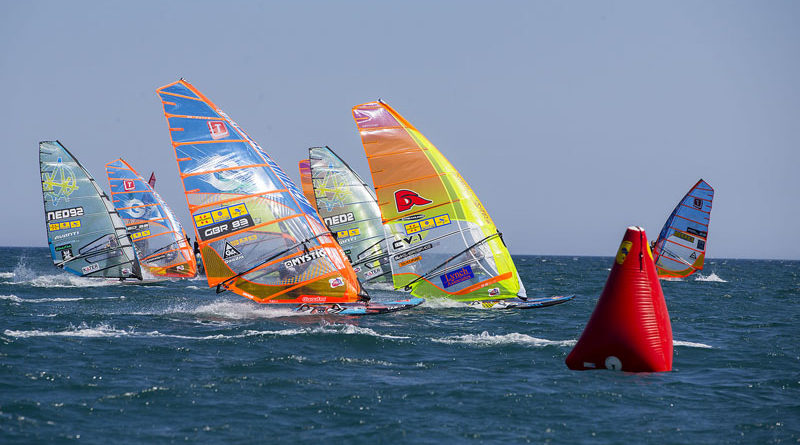 A slightly frustrating day as the wind teases competitors for much of the afternoon
The promising forecast never quite materialised with the wind lingering right on the race-able limit — 7-12 knots for the majority of the afternoon — which led to a slightly frustrating second day in Costa Brava.
Over the duration of the afternoon a further three heats in the second race were completed — meaning the first round is now complete. Timing the starts proved crucial again to ensure a top four position was held after the first gybe, otherwise the competitors faced an uphill challenge to qualify.
In the opening heat of the day Andrea Rosati (RRD / North) led from start to finish to comfortably qualify ahead of Tomas Malina (Fanatic / North), Ludovic Jossin (Patrik / NeilPryde) and Enes Yilmazer (Starboard / Severne), who did brilliantly to overtake Andrea Ferin (RRD / Challenger Sails) to claim the final qualifying place. 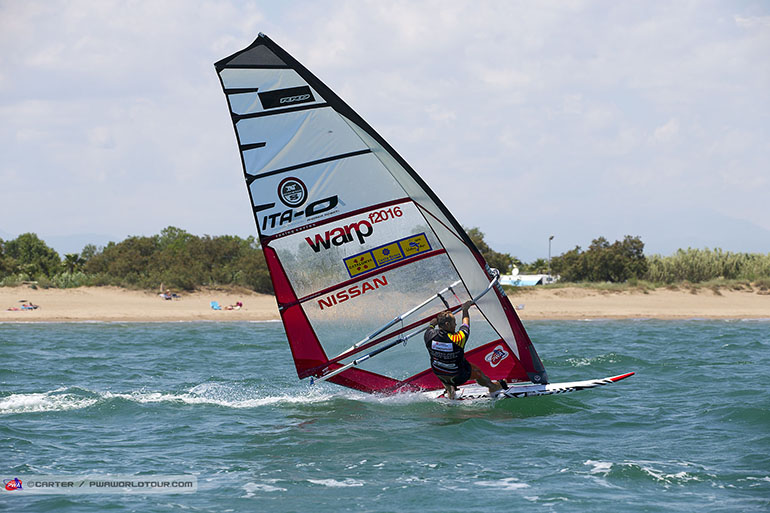 Heat 3 was completed at the second time of asking after the initial effort had to be cancelled due to a drop in the wind. Upon the restart Kurosh Kiani (Starboard / Point-7) made the best start and began his comeback after being disqualified from yesterday’s semifinal due to sailing in the wrong heat, which saw the Dane relegated to last place. However, he has displayed excellent pace on both days and looks ready to come back. Behind him were fellow Point-7 teammates Michal Aftowicz (RRD / Point-7) and Nicolas Goyard (RRD / Point-7), while the top four was completed by Coen Swijnenburg (JP / NeilPryde). 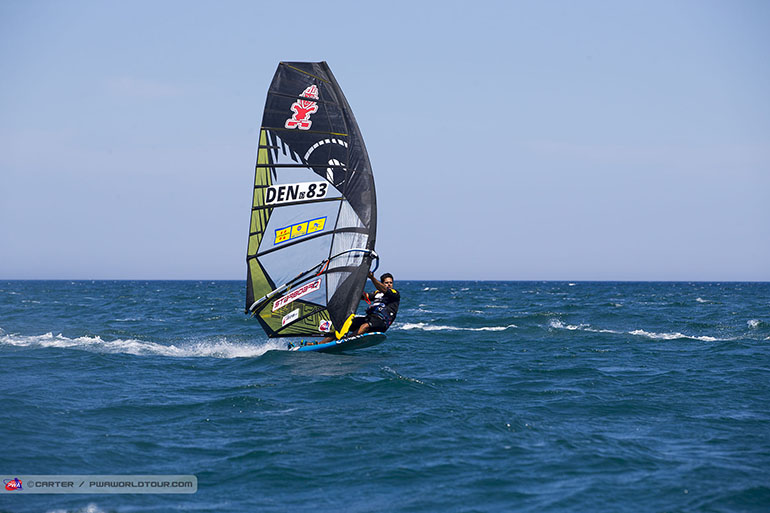 Heat 4 proved to be the final heat of the day and it was German Gunnar Asmussen (Starboard / North) who came out on top ahead of Sebastian Kornum (JP / NeilPryde), Alexandre Cousin (Patrik / Sailloft Hamburg) and local boy Marc Paré (99NoveNove / Simmer / Maui Ultra Fins), who clinched the final qualifying place. 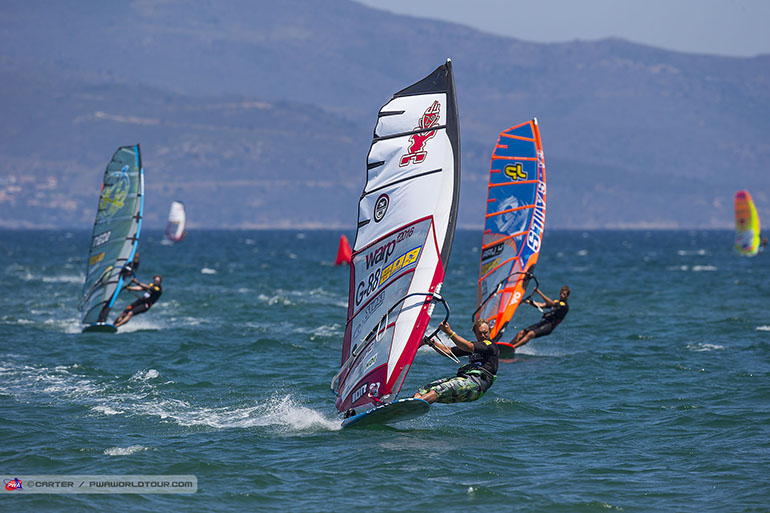 Earlier in the day we caught up with Taty Frans (Starboard / GA Sails / Mystic / Maui Ultra Fins), who finished 6th in yesterday’s final and made a change to his quiver for the 2016 season —  changing his biggest registered sail from 8.6m to 9.2m — a move which evidently paid off and the Bonairean had this to say: “It was the first time I was using such a big sail in the slalom and it’s actually kind of crazy. The racing was really good yesterday with steady winds, I also made a few of the guys angry with some aggressive, tactical gybing close to the mark, but for me that’s part of racing and if you don’t push the limit enough you’ll never make it to the top four. I just want to race and whatever happens it’s their problem or my problem — that’s just the way racing is.

I think changing up to the 9.2m was a positive move for me because we’re racing in lighter conditions and I’m also slightly heavier than I was. With the 9.2m I’m able to exit the gybes more easily and overall I think it really helps a lot even though it doesn’t necessarily feel like it to begin with.” 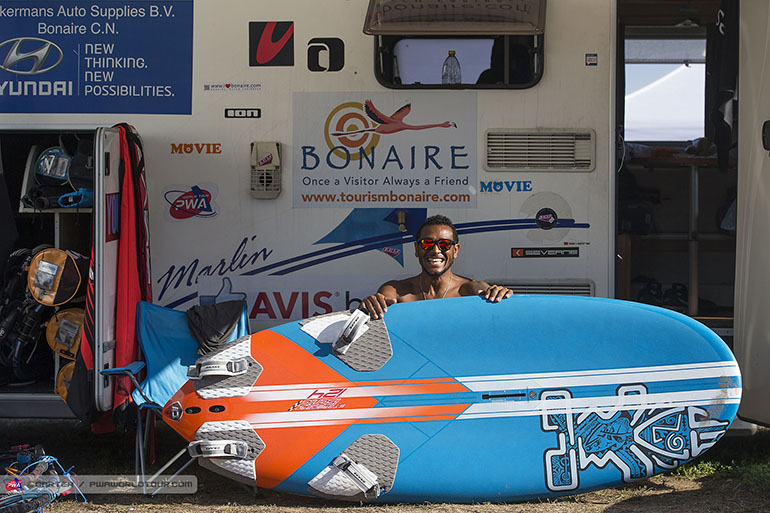 The forecast for tomorrow shows the possibility of Tramontana wind in the morning so with this in mind the sailors will meet bright and early tomorrow morning for a 6am skippers’ meeting — with the action commencing from 6:30am (GMT+2) — if conditions allow. Make sure you tune into www.pwaworldtour.com to stay up to date with all of the latest developments from the event. 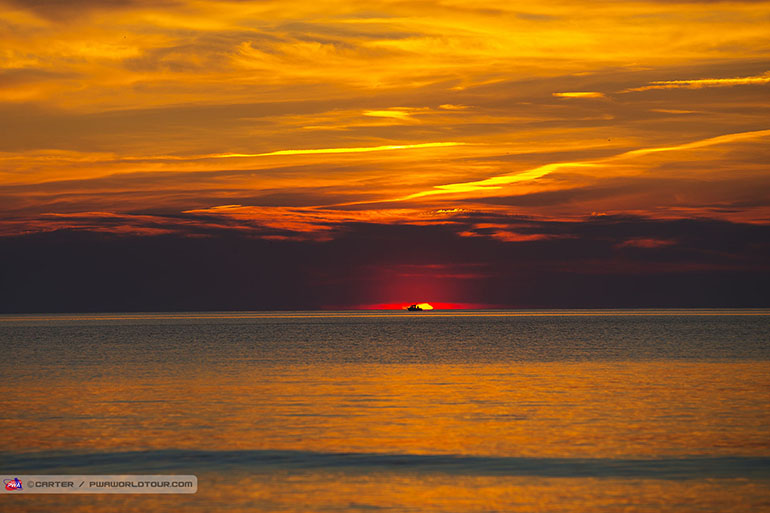 The sailors will be up early for sunrise tomorrow

To see all the latest from the event — including the live stream, elimination ladders, entry list, images and live ticker simply click HERE and scroll to the bottom of the page.