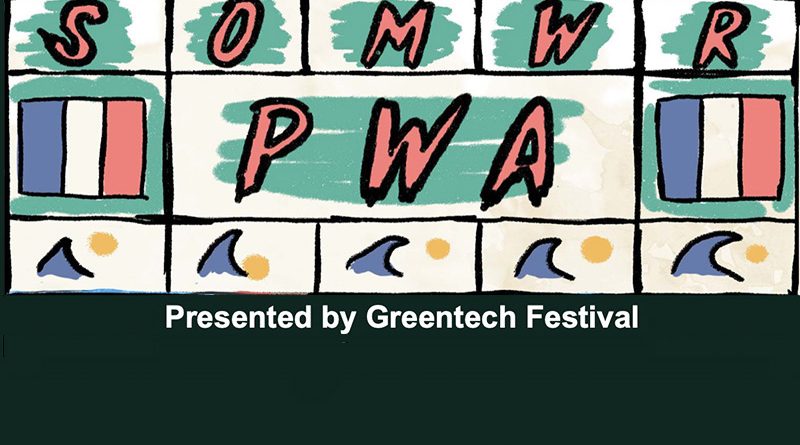 Event Preview
The COVID-19 pandemic has caused havoc with all sporting events over the last two years, however, there is finally light at the end of the tunnel and the next 10 days in France promises to be a stunner with 7 world titles on the line. From the 12th November Marignane will host the crème de la crème of the windsurfing world as the SOMWR 10 x Marignane PWA Grand Slam, presented by Greentech Festival, takes place. 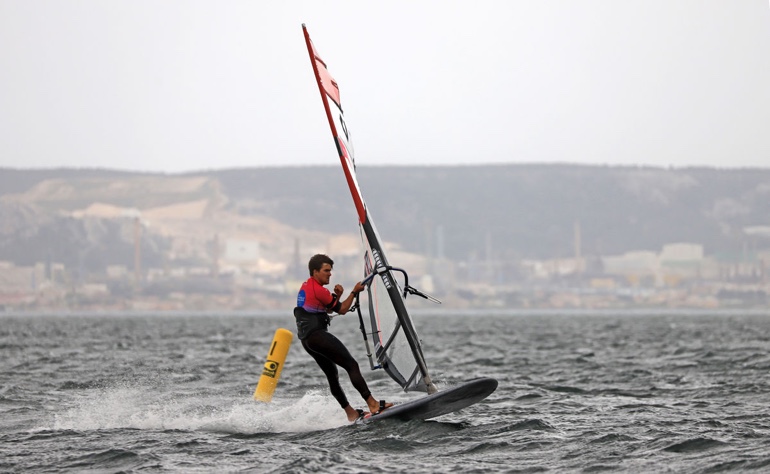 Marignane is located in between Marseille – the second largest city in France – and Aix-en-Provence, a place well-known for its colourful markets and delicious French delicacies. The region is renowned not only in the windsurfing world, but also the sailing world with Marseille hosting the 2024 Olympic Games nautical disciplines. Marignane is a windy wonderland and at this time of the year there can be a huge variety of conditions depending on what the European autumn throws at the competitors. The Slalom and Freestyle fleets will compete at Le Jai, whilst the wave fleet will compete at Carro.

Foil Women’s
Marion Mortefon (Fanatic / Duotone / LOKEFOIL) heads the Women’s Foil ranking coming into France after the 29-year-old pipped – Helle Oppedal (Duotone) – to the event title on the final day in Israel as she goes in search of a maiden world title.
However, Mortefon, will face a stern test, from Oppedal – who led for the majority of the recent Défi Wind – before being beaten to the title by Blanca Alabau (Starboard / Severne / Starboard Foil), who will also be a force to be reckoned with, whilst defending Foil champion – Delphine Cousin Questel (FMX Racing / S2Maui Starboard Foil) – will also be a major threat. 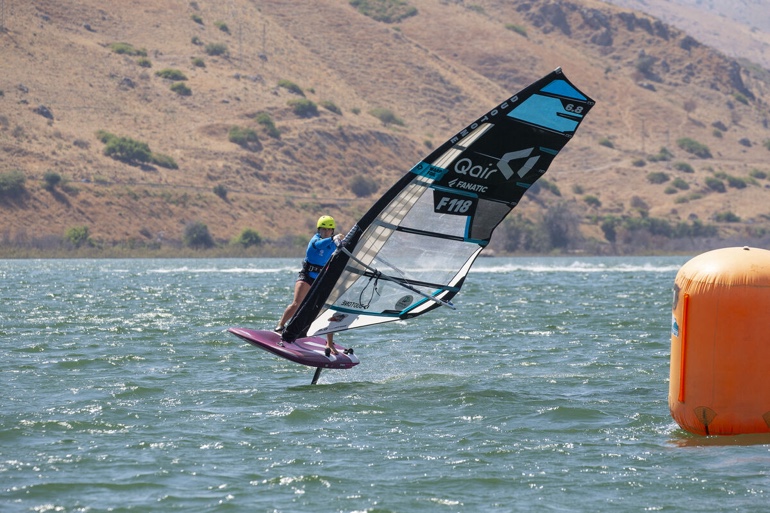 Sarah-Quita Offringa (Starboard / NeilPryde / Maui Ultra Fins) is also in with a chance of adding to her 17 world title haul – currently 4th overall. Lena Erdil (Starboard / Point-7 / AL360 / Chopper Fins) missed the event in Israel, but could be one to watch having been training heavily on the IQFoil.

Slalom Women’s
4-time Slalom World Champion – Sarah-Quita Offringa (Starboard / NeilPryde / Maui Ultra Fins) faces a massive 10 days with the Aruban vying to win a further 4 world titles in France. The 30-year-old comes into Marignane with the world title lead having dominated in Israel – claiming 5 victories out of 7, after a minor mid event blip – and will be the woman to beat. Offringa hasn’t finished outside of the event top 3 (in events attended) since 2010 and has won 65% of events entered since then – making her the heavy favourite. 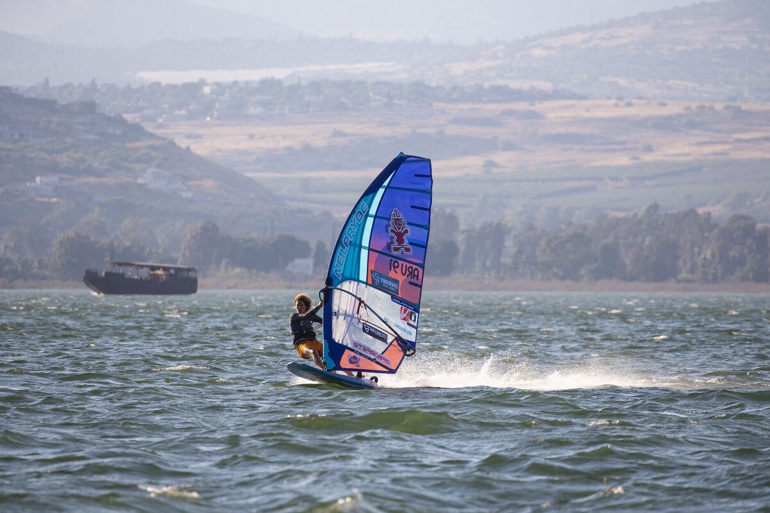 With 17 world titles to her name already – Offringa – will be a tough force to stop, however, the likes of Marion Mortefon and multiple time world champion – Delphine Cousin Questel (FMX Racing / S2Maui Starboard / Foil) will be gunning for a shot at the world title. Elsewhere, Lena Erdil (Starboard / Point-7 / AL360 / Chopper Fins), returns to the field and should be involved in the chase for the podium along with 2019 World No.3 – Maëlle Guilbaud (Patrik / Loftsails), whilst the British duo of – Sarah Jackson (Fanatic / Duotone) – who won her first elimination in Israel – and former race winner – Jenna Gibson (Fanatic / Duotone) – should be competitive too.

Men’s
Nicolas Goyard (Phantom Windsurfing) comes into the season finale with the world title lead having dominated in Israel. The reigning Foil World Champion – won 5 out of the 7 eliminations in Tiberias and missed out on the Winners’ Final just once. The 25-year-old made the choice to concentrate on foiling during the pandemic, which paid its just reward in Israel and could lead to his second world title at the end of the next 10 days. 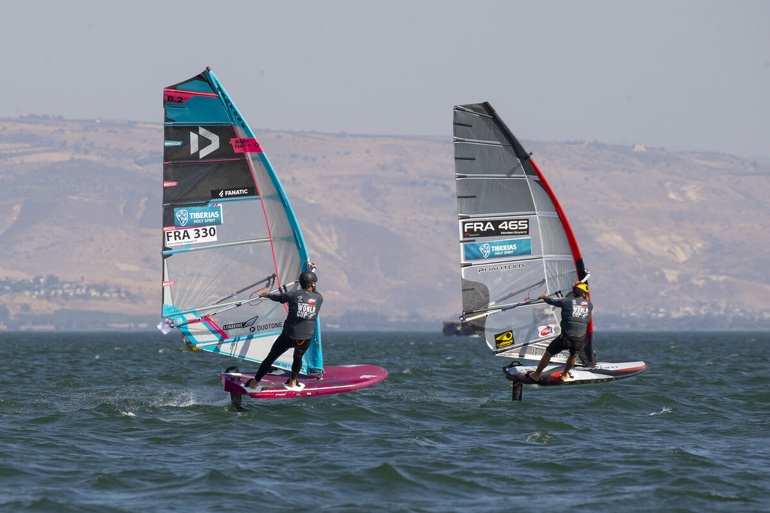 Nicolas Goyard together with William Huppert

However, reigning Slalom World Champion – Pierre Mortefon (Fanatic / Duotone / Chopper Fins / LOKEFOIL) – will be hoping to defend his world title. Mortefon was extremely consistent in Israel – finishing outside the top 8 just once, whilst he signed off the event with back-to-back bullets to propel himself into second place.
With this being the decider there are a plethora of names who could also come in and steal the world title. Firstly, William Huppert (Fanatic / Duotone / LOKEFOIL), who earned his first podium in Israel, Maciek Rutkowski (FMX Racing / Challenger Sails), who was the only sailor to boast a 100% qualifying record for Winners’ Finals in Israel, Antoine Albeau (JP / NeilPryde), who comes into the event on the back of winning the Défi Wind and Enrico Marotti (JP / NeilPryde), who currently sits in 6th place.
Meanwhile, 2016 World Champion – Matteo Iachino (Starboard / Severne / Starboard Foil) – will be another major threat along with Jordy Vonk (Fanatic / Duotone), Basile Jacquin (FMX Racing / Point-7 / Phantom) and Alexandre Cousin (Patrik / Phantom Sails / Chopper Fins / Phantom Foils). 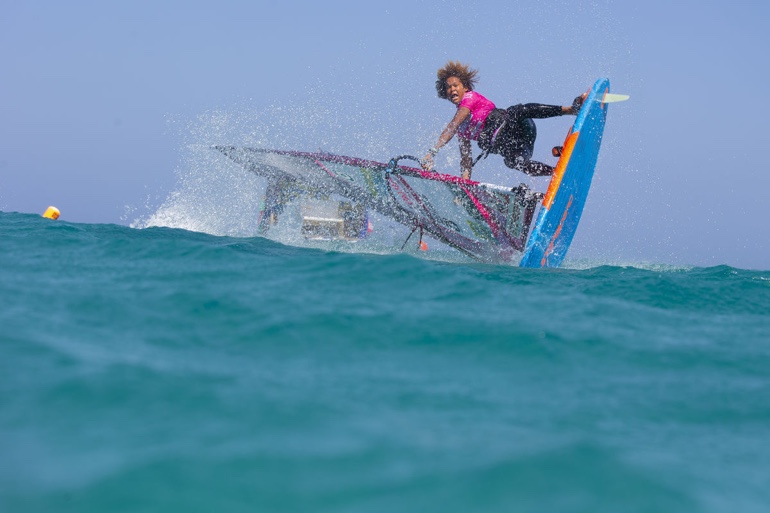 However, a 13th Freestyle world title is far from a given with vice-world champion – Maaike Huvermann (Severne / Severne Sails / Maui Ultra Fins) – waiting in the wings to claim her first world title. The 23-year-old is the only woman in the world to have won a heat against Offringa in 11 years and will remain Offringa’s biggest threat.
The ultra competitive – Oda Brødholt (Starboard / Severne / Maui Ultra Fins) – will also be right in the mix with the Norwegian not finishing outside the overall top 3 since 2014. Brødholt trains predominately with Offringa and could cause an upset.

Men’s
Yentel Caers (JP / NeilPryde) comes into France as the defending PWA Freestyle World Champion having claimed his first world title in 2019. The Belgian is known for his explosive moves and is extremely consistent, which has made him one of the powerhouses of the freestyle world. 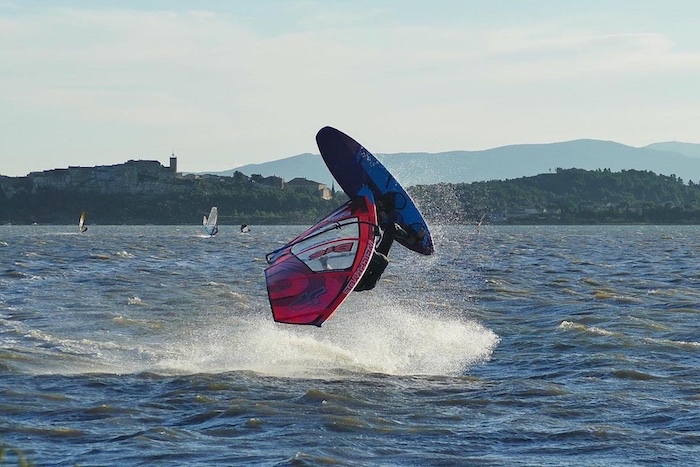 However, Caers, will face an extremely difficult test to defend his world title. The 26-year-olds primary threat will more than likely be – Amado Vrieswijk (Future Fly / Severne) – who claimed the 2021 European Freestyle title – and won 2 out of the 3 events on the world tour in 2019. Many would have already bet on Vrieswijk winning a world title by now and you can expect a massive performance from the Bonairean.
On top of the threat from Vrieswijk, Caers, will also have to try and hold off the King of Freestyle – José ‘Gollito’ Estredo (RRD / RRD Sails) who transferred to RRD during the pandemic. Gollito is a competitive monster and no one would be surprised to see him come out on top as he searches to complete La Décmina.
Of course with this being a one-shot takes all event there are plenty of other names who could steal the crown. Former World Champion – Steven van Broeckhoven (Starboard / GUNSAILS) – looked back to his best in 2019 – winning in Fuerteventura – and will be a massive threat, whilst Youp Schmit (Tabou / GA Sails), who led the world title race heading into the final event in 2019 should also be challenging for top honours as he seeks a first world title.
In terms of home hopefuls – Adrien Bosson (Fanatic / Duotone / Maui Ultra Fins) – will be the biggest hope. The 30-year-old finished as the vice-world champion in 2018 and has all the weapons necessary to claim the top place on the podium.
Other names to look out for include – Balz Müller (MB-Boards / Severne) – who is leading the foil Freestyle revolution – young gun – Lennart Neubauer (Starboard / Severne / Maui Ultra Fins) – who finished this season as the EFPT tow-in champion and is widely regarded as the best up and coming freestyler, whilst Jacopo Testa (RRD / AL360), former world champion – Dieter van der Eyken (Severne / Severne Sails) and the French duo of Antony Ruenes (Tabou / GA Sails) and Sam Esteve (JP / NeilPryde) should also feature.

Wave Women’s
In 2019 – Sarah-Quita Offringa – became the first woman in over two decades to wrestle the Women’s Wave PWA World Championship from the Moreno’s arms as the Aruban clinched her first world title after reeling off back-to-back victories in Sylt and Maui. 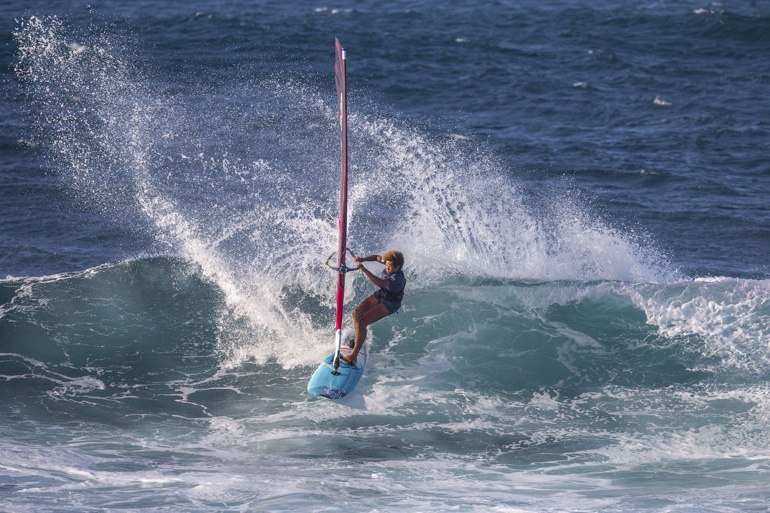 As the reigning world champion, Offringa, will start the event as the favourite, but she will face a tough test to hold on to her world title. Before 2019, Iballa Moreno (Severne / Severne Sails), had won the previous 5 world championships and will therefore be Offringa’s main threat, but you also cannot rule out the threat of Justyna Sniady (Naish / Naish Sails / AL360), who enjoyed her best season to date in 2019 – completing the prestigious overall podium, whilst Lina Erpenstein (Severne / Severne Sails) should also be challenging for the top 3 in France.

Men’s
Philip Köster (Severne / Severne Sails / Black Project Fins) will be going in search of a 6th world title at the age of just 27, but will face a tall order to add to his current record. Köster’s rivals are lining up to take their shot at the 2021 world title and anything could happen at Carro with port and starboard tack conditions being possible.
Marcilio Browne (Goya Windsurfing) finished 2019 as the vice-world champion and will be looking to add to his sole wave world title from 2013, whilst Ricardo Campello (Naish / Naish Sails) will go in search of his first wave world title. Campello won the last wave event in France – La Torche 2014 – and a similar performance here would bring him the wave world crown he craves. 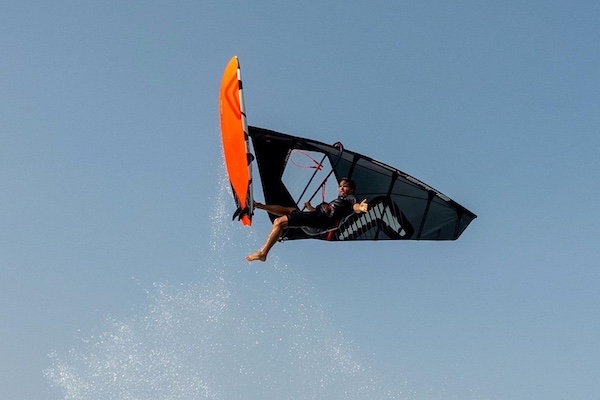 With this being the first wave event for two years some of the next generation may also pose a serious threat. Top of that list will be Marion Gil (Goya Windsurfing) followed by Takuma Sugi (Tabou / GA Sails), whilst the Aloha Classic champion from 2019 – Antoine Martin (Starboard) – should also be a contender.
The SOMWR Movement 10 x Marignane PWA Grand Slam starts tomorrow and you’ll be able to follow all of the action as it happens via the PWA live stream @ www.pwaworldtour.com. 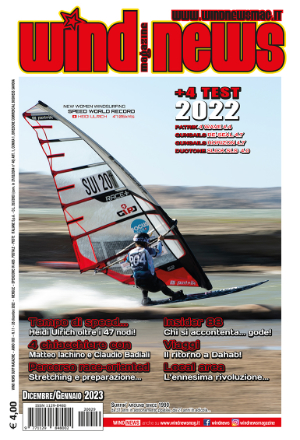