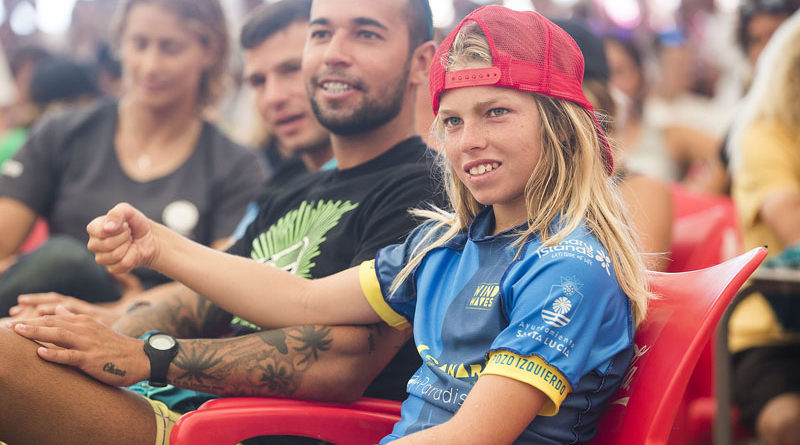 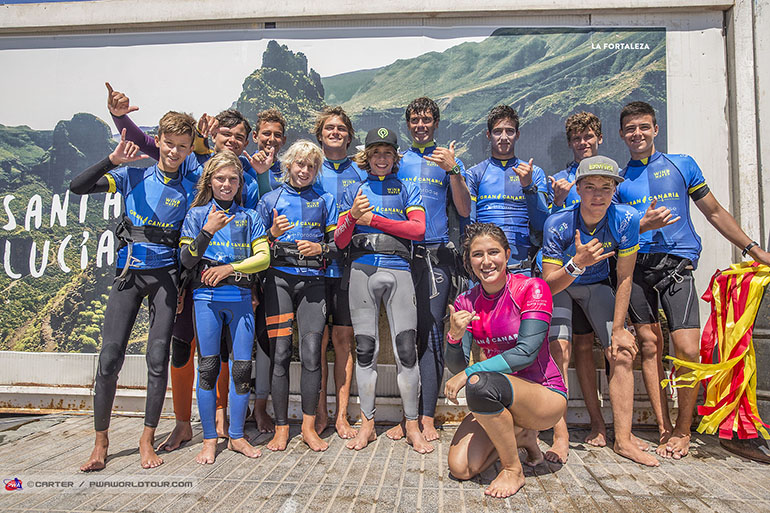 The next generation take centre stage on opening day
The opening day of the 2016 Gran Canaria Wind & Waves Festival saw the sailors registering for the upcoming week of competition between 9:30am and 11am before the first skippers’ meeting of the week was held at 12:30pm.

The wind was present from the word go, but unfortunately the waves dropped during the afternoon with the high tide meaning the pro’s remained on standby today. However, there was some action during the afternoon as the Youth’s took centre stage for the first time this week.

In the 12 and 13 year old category Marino Gil (Goya Windsurfing) stole the show as he threw down a sick tabletop forward and a planing backloop and he will not meet Sugi Takuma (Naish), Jose Antonio Casanova Perez (North) and Liam Dunkerbeck (Severne) in a 4-man final, which will be held tomorrow if conditions allow. 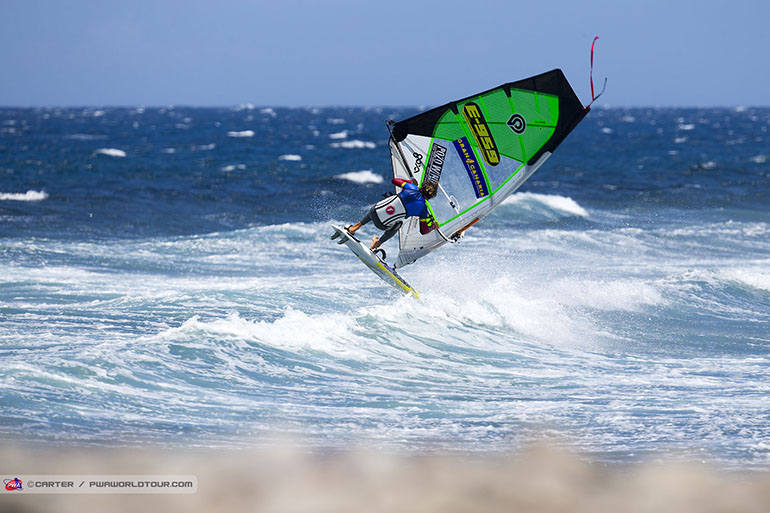 Meanwhile, Miguel Chapuis (NeilPryde) came out on top in the opening 14 and 15 years old heat as the Spaniard combined a shuvit and a stylish forward with a 7 point wave ride to finish ahead of Mike Friedl (Goya Windsurfing), who stomped a sick tabletop forward. 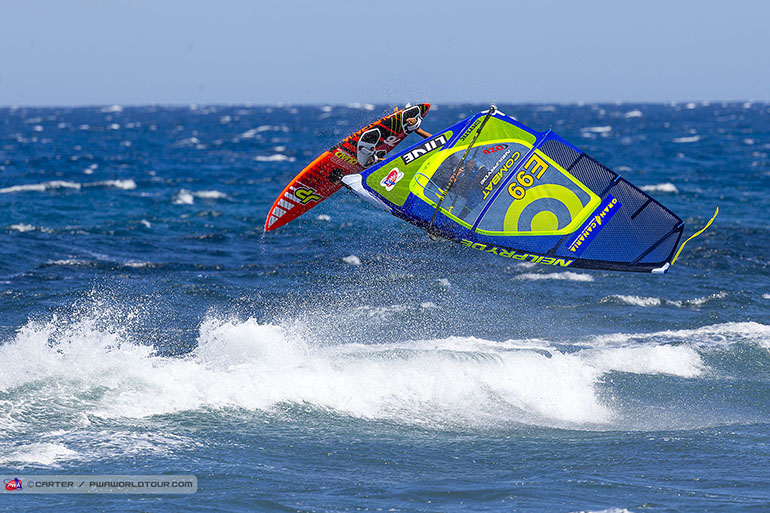 In Heat 2 Valentino Pasquale (North) caught the eye of the judges with his wave riding in particular setting him apart. The Argentinian recorded the highest single wave score of the day — earning 8.5 points, while Adam Warchol (Goya Windsurfing) also progressed. 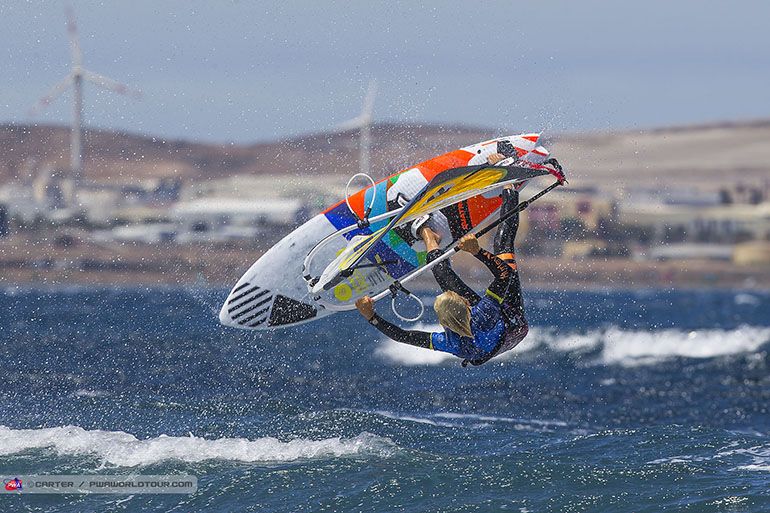 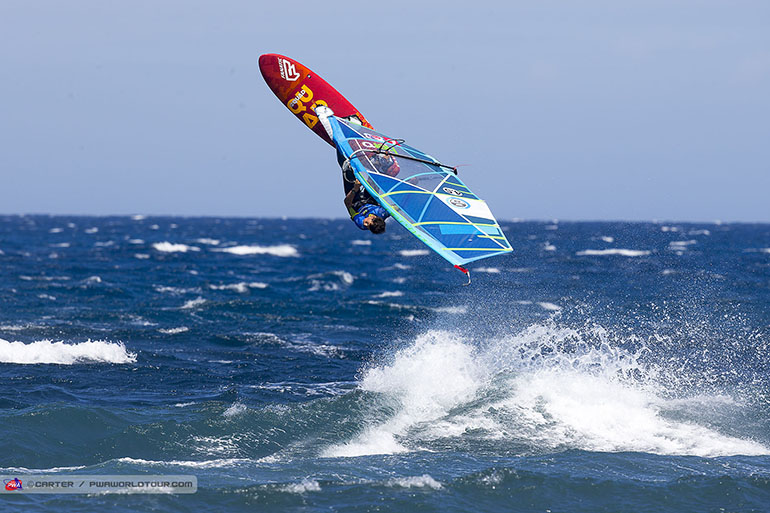 The fight for the remaining qualifying place saw a close battle between Max Schettewi (JP / Hot Sails Maui) and Tim van dam Sanchidrian (Starboard / Flight Sails) — in the Schettewi was given the verdict by way of a 2:1 decision. 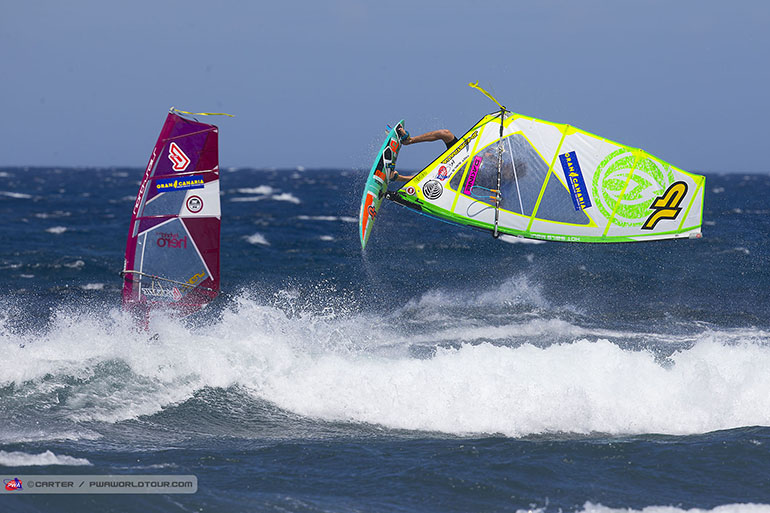 The forecast for tomorrow predicts slightly less wind and smaller waves so the pro fleet may well remain on hold again, but there will hopefully be enough to complete the Youth’s. The forecast from Thursday onwards looks excellent with strong winds and waves just under 2 metres being predicted, which should lead to a fascinating contest. The sailors will meet again tomorrow morning at 10am with the action commencing from 10:30am (GMT+1) if conditions allow. Make sure you tune into www.pwaworldtour.com from the 3rd-9th July to see all of the gravity defying stunts as they happen via the PWA live stream and live ticker.