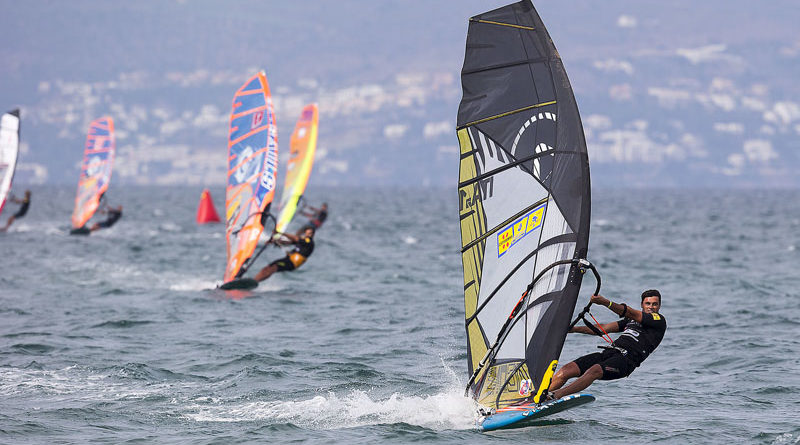 Costa Brava
For a long time on the final day it didn’t look like it would be possible to complete anymore racing in Costa Brava with the conditions remaining extremely light throughout the day. However, as has happened on a few final days here in recent years the wind kicked in, in the dying hours of the event to produce a frantic finale, which began with several sailors desperately scrambling their equipment to the beach in order to make their heats — with the arrival of the wind catching many off guard. 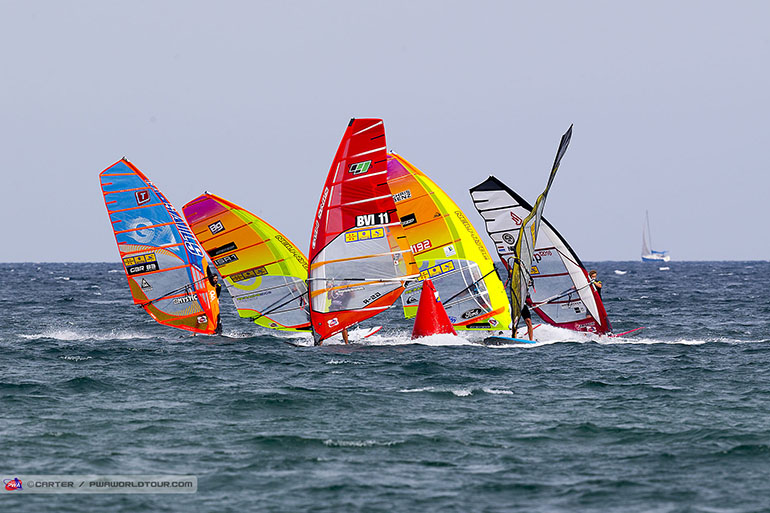 Winners’ final action
With the way the event rankings stood some sailors had everything to lose, while others had everything to gain and as the second elimination was completed the rankings changed quite substantially with just 3 out of the original top 10 sailors holding their position from the first race. Crucially though one of those sailors who managed to defend their positions was Pierre Mortefon (Fanatic / North), who had led the event since the opening day and the Frenchman claims his first event victory of the year, while also taking the lead in the race for the 2016 PWA Slalom World Championship. 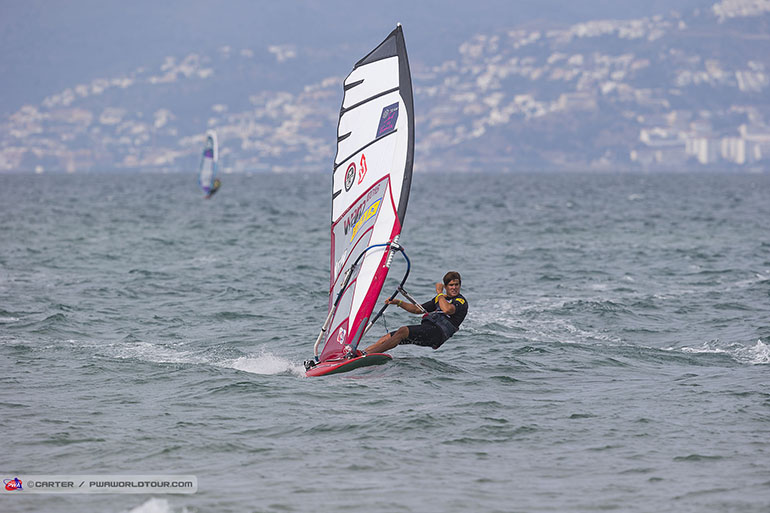 Mortefon clinches victory in Spain and No.1 in the world

Winners’ Final
Finian Maynard (99NoveNove / Gun Sails) held a narrow advantage over Andrea Cucchi (Starboard / Point-7), Jordy Vonk (Fanatic / North) and Antoine Albeau (RRD / NeilPryde) as the fleet rounded the opening buoy, while Pierre Mortefon found himself at the back of the fleet. However, after the third gybe the positions took a major change with several sailors struggling to exit the gybe, which allowed Cucchi to burst into a significant lead, while Ross Williams (Tabou / GA Sails / Mystic) and Arnon Dagan (RRD / NeilPryde) moved into second and third place respectively. Mortefon benefitted the most as he moved from last to fourth after pumping his heart out. With a clear advantage Cucchi safely navigated the final buoy to claim his first bullet of the season — which sees the Italian claim the final spot on the podium, which is his maiden top 3 finish. Behind him Williams secured second place ahead of Dagan, third, and Mortefon successfully defended off the challenge of Maciek Rutkowski (Tabou / GA Sails) to finish fourth. 23 year old, Vonk, was possibly the unluckiest on the exit of the third and the Dutchman misses out on a maiden podium finish by an agonising 0.3 of a point. 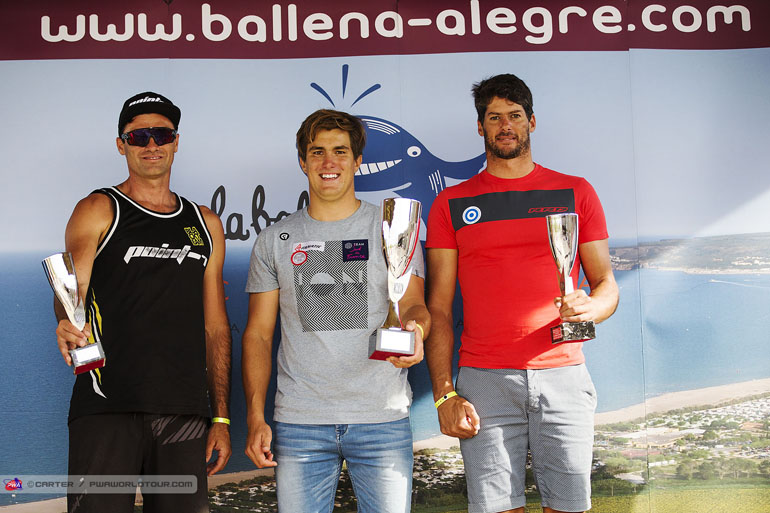 In the losers’ final Jimmy Diaz (Starboard / North) led from start to finish to complete an excellent for the President of the PWA. Diaz has looked sharp on his starts over the couple of completed races and earns 6th place overall. Steven Allen (Patrik / Severne) finished behind the Italian ahead of Matteo Iachino (Starboard / Point-7), who now occupies 2nd in the overall rankings, and Sebastian Kördel (Starboard / GA Sails), who finished 4th in Heat 15. 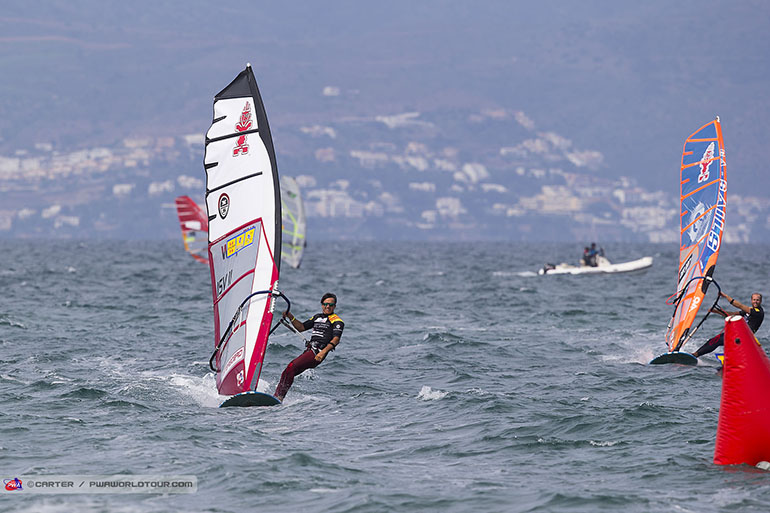 Elsewhere, Nicolas Goyard (RRD / Point-7), performed excellently as the 20 year old qualified for the semifinals after showing excellent tactical awareness, and the ability to perform under pressure, when being pursued by Julien Quentel. Goyard eventually finished the round in 14th place. 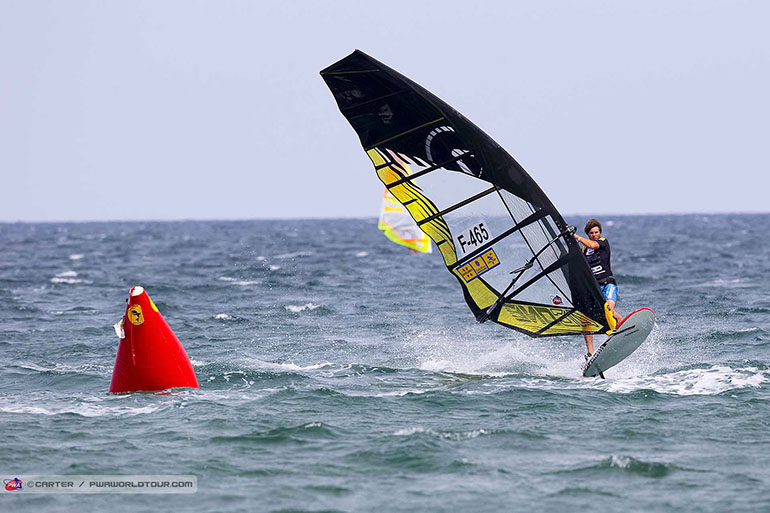 After a frantic finale the closing ceremony was held shortly after 6pm where Pierre Mortefon was crowned the champion of Costa Brava alongside Arnon Dagan and Andrea Cucchi.

One thought on “Catalunya PWA World Cup – the end!”