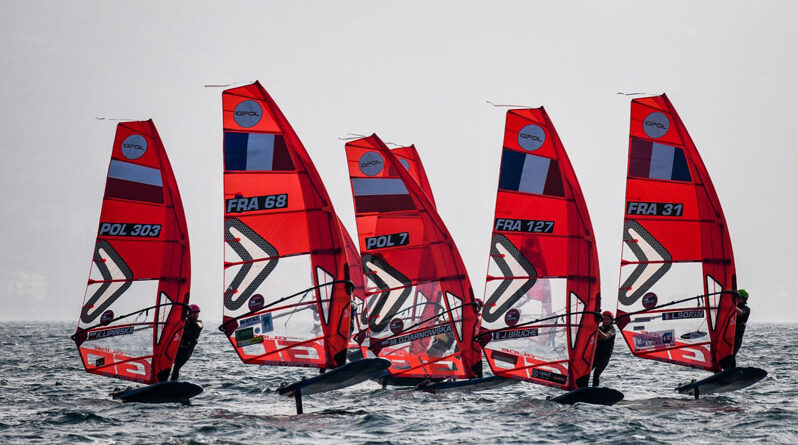 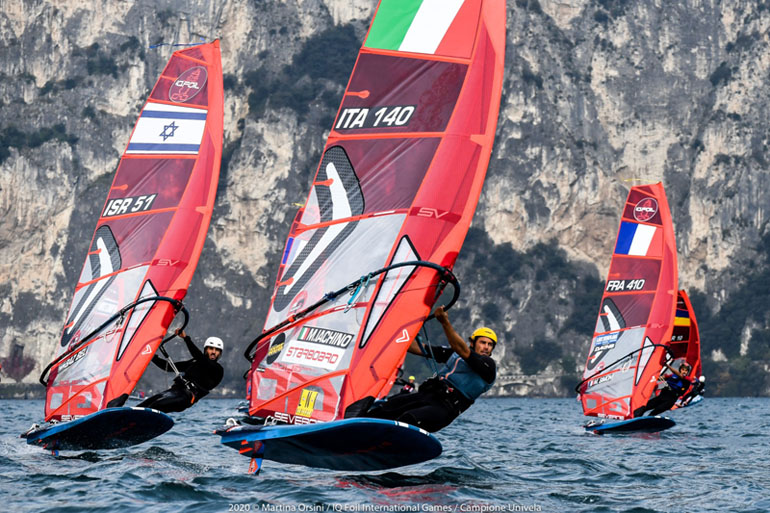 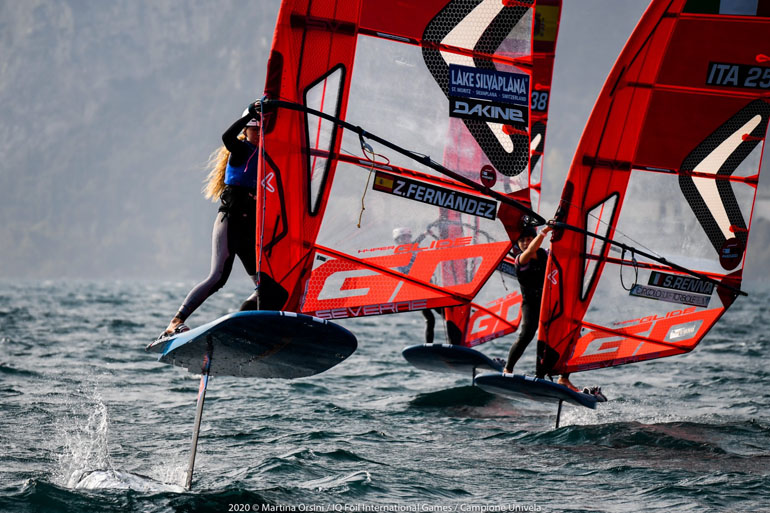 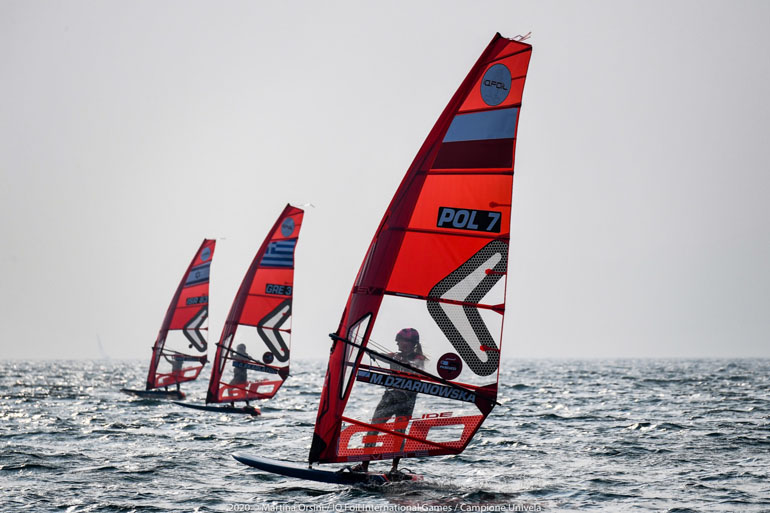 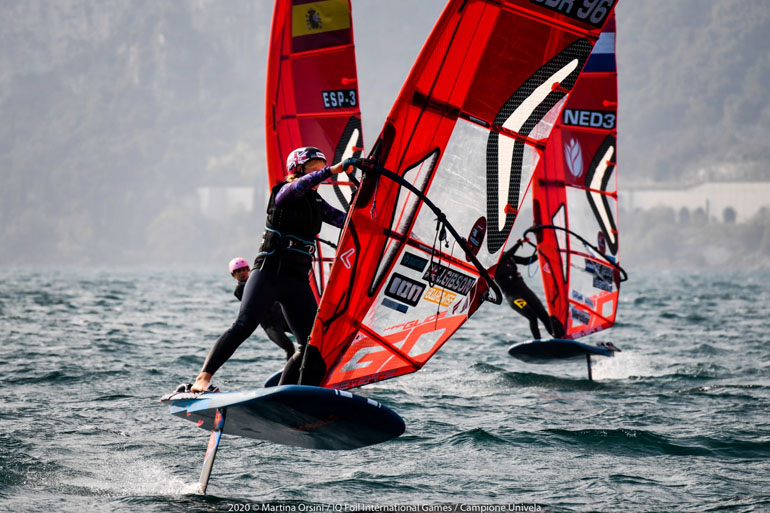 Plenty of races in the books on Day two of the the iQFOiL International Games at Univela Sailing in Campione, Lake Garda, consolidating its reputation of an ideal spot for sailing.
The morning began as planned with the women starting at 9:30 for the Marathon race, one of the three formats of the new Olympic sail board; the men followed in right after at 9:40. The wind was very light when everybody arrived to the club before racing, but it picked up as the sun came up from behind the tall mountains that surround the beautiful Italian lake, burning away the morning fog.
A fascinating ‘rabbit start’ for both men and women, racing separately, who were for the first time experimenting with the long distance format in a very big fleet. The course consisted of a six nautical mile long upwind to Capo Reamol, then a downwind towards the beautiful castle in Malcesine, sitting on the opposite side from Univela Sailing in Campione. 8 to 10 knots on the racecourse from the North with the typical ‘Peler’, known and appreciated by all the sailors who are familiar with these shores. It was a classic situation where the rich got richer, and the ones who started well kept the lead all the way down to the finish. Kiran Badloe (NED), Rytis Jasunias (LTU) and Alexander Cousin (FRA) were the top three in the men, with Belgian Steven van Broeckhoven in fourth – all coming from different backgrounds: a RS:X sailor, two from the PWA and a world champion in freestyle. In the women the best one was Israeli Noy Drihan, followed by two Polish riders, Maja Dziarnowska and Karolina Lipinska; with last night overall leader Helene Noesmoen finishing in fourth.
“I had a really bad start, but I managed to make up on the upwind – commented Steven Van Broeckhoven – I was pumping a lot because I was afraid I would be last, and this brought me among the top ten at the upwind mark, then had no idea in which position I would be downwind, I was just working hard to be as fast as possible, and I was very please to find myself in fourth position!
“I am actually a freestyler, I’ve been competing for more than 10 years in the PWA freestyle, I am the 2011 World Champion and I have won five times the European title in that discipline. The foiling, in the beginning, represented for me just the alternative for fun in light winds, but now I actually got more into the racing, and especially now that it is an Olympic class I focus a lot more on the foiling.”
“It was a pretty exciting first Marathon in iQFOiL – said Rytis Jasiunas, a young, promising and big Lithuanian rider – and I wasn’t sure how it would go, I waited on the beach until the very last second to see the wind conditions and pick the right gear, when I saw that the wind was on the light side I got the right set up for that. I had a good start and I was on leading pack from the first tack.
“We are still discovering the pros and cons of each body type in this class. One of the pro is certainly that being more than 2 mt tall I can put a lot of power in the foil from the side: you can see that Kiran (Badloe) and I – both over 1,95 mt – are first and second, so I don’t know if it is only for that, but I can put a lot of power even though I am on the heavier side, being above 90 kg, I can power the gear to do well in the light conditions as it happened today”
“I enjoyed the Marathon very much – commented the female winner of the Marathon Noy Drihan – the wind conditions were the ones I like, not too strong and not too light, perfect for foiling and it was super fun. Coming from the RS:X I find it very nice to foil, I love the feeling of flying over the water. I had already tried the Marathon in Silvaplana in the Open Championship, and that experience probably helped me here today to win this race.”
With the ‘Ora’ building up as the air warmed in the afternoon, the women were the first to hit the water with the slalom race format, so as to catch up to the races completed by the men from yesterday. The French PWA rider Delphine Cousin got the first bullet while the second went to fellow countrywoman Helene Noesmoen, thus consolidating her overall leadership.
Sebastian Koerdel (GER) proved to be the best of the men in the Slalom, winning again in today’s race, with the Italian PWA windsurfer, Matteo Iachino finishing third.
“It was a good day today – says Italian rider Matteo Iachino – with the Marathon in the morning with light wind dying on us, a very tricky downwind, but I can’t complain as I finished ninth after recovering from a bad start, in the middle of the fleet. Slalom in the afternoon was fun, a good third for me so I am still there fighting with the best; I am enjoying the new iQFOiL class, the gear is great and they’re managing everything well.”
Day two wraps up in Campione Univela, while we are already looking at tomorrow’s conditions, that look similar to today’s. Some windward-leeward races are planned in the morning and a couple of slalom races in the afternoon, were confirmed in the evening skippers’ briefing, held online to avoid assemblies in these critical times we are facing. This is just one of the many strategies put in place by Univela Sailing, and the co–organising club Società Canottieri Garda Salò, in order to keep the international event on the calendar and run it safely both ashore and on the water.